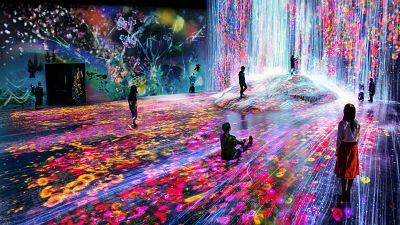 One of the most successful immersive art experience collectives is suing another claiming they’ve copied their ideas.

The Tokyo-based art collective teamLab has made a name for their “digital art museum”. Visitors walk around large spaces with huge light installations that react to the visitor’s movement.

Started by a group of five friends in 2001, the Digital Art Museum was a runaway success when it opened in Tokyo in 2018. The collective now includes over 500 artists, programmers, animators, animators, mathematicians and architects.

Since the Tokyo show, teamLab’s immersive artworks have been included in the permanent collections of multiple galleries in cities including the Museum of Contemporary Art in Los Angeles.

Now, teamLab has accused another Los Angeles museum, the Museum of Dream Space (MODS) of violating its copyright.

Why are they so similar?

The legal battle from teamLab actually goes back two years when the Japanese group were made aware of MODS and its larger Beijing based tech company Dahoo, which produces light shows and installations for shopping malls.

The two works they argue MODS has most closely copied are their exhibitions “Boundaries” from 2017 and “Crystal” from 2015.

teamLab claims that MODS has copied their “use of multicoloured flowers flowing across the ground, the streams of light/water cascading down the wall and onto the ground, and the interactivity of the work responding to the user’s proximity to the exhibit. Both works also contain artwork flanking either side of the waterfall giving off the appearance of outer space or stars.”

But MODS has claimed they can’t be sued for copyright as teamLab doesn’t have any copyright registrations in the US to make their claim in the first place.

They have also stated that any elements that teamLab could have registered a copyright for, are “either not original to teamLab, not protectable, or both.”

Interestingly, they have also questioned whether any piece of artwork that responds to viewers could have a copyright, given the changeable and transformable way the art exists.

teamLab has already had some legal success defending their immersive experiences. After MODS posted images of teamLab installations to their social media accounts, a court agreed that the images were not inappropriately destroyed or removed.

They also won a lawsuit against a Chinese company that was running a similar experience. This time though, that company had the gall to call themselves Teamlab Borderless, making it hard to argue the Chinese company wasn't copying the work.

"Whilst immersive art would indeed provide copyright protection, there are several difficulties in trying to protect such work," Mohammad Khan, a solicitor for intellectual property law firm, Briffa, explains.

"For infringement to occur, the infringing party must have had an opportunity to copy and must have copied the whole or a substantial part of the work. There is no definitive science to the test of substantiality," he continues.

"As MODS is putting forward in their defence, copyright protection is targeted at the expression of an idea and not the idea itself. Given that immersive art is rapidly evolving, artists are finding inspiration from one another, and viewers are bound to find similarities in certain works. Whether those similarities are a simple inspiration or a direct infringement is the complex question that is a challenge for immersive art experiences and artists to prove", he says.

In an art world that is increasingly saturated with immersive experiences, are teamLab going to face more and more “copycat” installations?

With art galleries now in search of the Instagrammable moment, immersive and virtual experiences have become a regular feature of art galleries.

Just this month in London saw the launch of Alienarium 5 at the Serpentine Gallery, an immersive art experience that has visitors using a virtual reality headset to interact with alien creatures. There was also “Van Gogh: The Immersive Experience” which projects flowing and deconstructed versions of the famous artist’s paintings on the walls around visitors.

And although teamLab may be one of the most famous collectives to experiment with large light installations that react to visitors, they are certainly not the first to come up with similar experiences.

2012’s Rain Room by Random International had visitors walking through a room of torrential rain without getting a single drop on them.

There is also DRIFT, founded by two Dutch artists and hosted at Pace Gallery, a New York gallery that also promotes teamLab’s work. DRIFT create experiential sculptures and installations that have a similar impressive quality to their Pace Gallery counterparts.

Immersive art experiences are here to stay, and while teamLab’s claims against MODS may or may not be found true, if the collective hopes to keep this corner of the market to themselves, they are definitely mistaken.