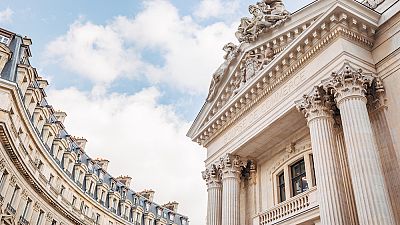 On 8 December, the PinchukArtCentre in Ukraine named the young Afghan artist Aziz Hazara as the winner of one of the world’s most valuable art awards, the Future Generation Art Prize 2021.

Receiving a cash prize of $60,000 (€52,926), plus an additional $40,000 (€35,284) towards the production of new work, Hazara was selected by a seven-strong international jury that included the Italian curator Jacopo Crivelli Visconti, Indian artist Shilpa Gupta, and the director of London’s Hayward Gallery, Ralph Rugoff.

In a statement included in the announcement, the jury described Hazara’s multichannel video installation ‘Bow Echo’ as “an ephemeral and compelling monument in our present moment.”

Depicting five boys, one per screen, braced against the wind in a barren, mountainous area outside Kabul, the jury added that, “the piece shows how artists continue to imagine complex independent ways of existence, even amidst conflicts that seem never-ending.”

Hazara’s installation, alongside work by the 20 other shortlisted artists, will remain on show at the PinchukArtCentre in central Kyiv until 27 February 2022. The exhibition will later move to Italy to be shown during the Venice Biennale at Scuola Grande della Misericordia, from April through to August.

Founded in 2006, by the Ukrainian billionaire Victor Pinchuk, the PinchukArtCentre is one of many generously funded, independent spaces across Europe that exist outside of the state-run and commercial halves of the art world.

While big national institutions and blue-chip galleries continue to play a defining role, such independent spaces — often instigated by wealthy individual collectors or corporate interests — are growing in both importance and ambition.

As one of the most well-funded examples of its kind, the PinchukArtCentre has quickly grown to become a key element in Ukraine’s art scene, with strong links to international artists and professionals.

As well as the Future Generation prize, conceived by Pinchuk in 2008, the centre manages an extensive archive of Ukrainian art from the early 1980s to the present, and has staged solo exhibitions by big name international stars such as Anish Kapoor, Olafur Eliasson and Takashi Murakami.

The Garage Museum of Contemporary Art

In neighbouring Russia, another billionaire-backed institution is the Moscow-based Garage Museum of Contemporary Art.

Founded in 2008 by Dasha Zhukova and Roman Abramovich, the museum was originally housed in the former Bakhmetevsky Bus Garage, before moving to the reconstructed site of the former Vremena Goda restaurant in 2015.

In November, the museum announced that it will renovate the Hexagon pavilion in Gorky Park to give itself an even larger footprint in the Russian capital. Built in 1923, the pavilion will be refunctioned for 21st-century purposes based on designs by the Japanese architectural firm SANAA.

Whilst the building’s historical features and hexagonal form will be preserved, the major overhaul will create over 9.500 square meters of usable space, including three exhibition spaces, a library, bookshop and cafe.

Garage exhibitions in 2022 will include a retrospective for the Soviet-era abstract painter, Lydia Masterkova, which opens in March. There will also be the first solo exhibitions in Russia for the German artist Anne Imhof, also opening in March, and the British artist Helen Marten, opening in September.

On a wider European scale, the growing influence of ambitious independent initiatives is far from limited to eastern Europe.

Even in Paris, where one of its oldest museums, the Louvre, is still the most visited in the world, the opening of major new independent spaces has boosted the city’s cultural cachet in recent years.

In 2014, for example, Fondation Louis Vuitton opened its dramatic, Frank Gehry-designed museum and arts centre in the Bois de Boulogne.

The arrival of Gehry’s futuristic creation was followed earlier this year by the opening of the Pinault Collection’s new museum in the historic Bourse de Commerce building, adding another significant new player on the Parisian scene.

2022 exhibitions in the new space will include the first monographic exhibition in France dedicated to the American sculptor Charles Ray, opening 16 February. Organised in collaboration with the Pompidou Centre, work by Ray will be shown across both institutions, with the Bourse de Commerce display featuring seventeen sculptures, including six new pieces.

Flexing its binational reach, 2022 will also see the Pinault Collection stage the first major retrospective in Italy for South African-born Marlene Dumas at its Palazzo Grassi venue in Venice, with work on show by the artist from 1984 through to the present.

Continuing a theme of initiatives backed by wealthy collectors, another exhibition to look out for next year will be the planned June opening of work by Jeff Koons at the DESTE Foundation Project Space on the enchanting Greek island of Hydra.

Founded in 1983 by the Greek Cypriot industrialist Dakis Joannou, the DESTE Foundation has a long tradition of organising summer shows in a requisitioned former slaughterhouse on the Aegean island.

Postponed due to the pandemic in both 2020 and 2021, it is hoped the much-publicised Koons exhibition will finally go ahead at the third attempt.

While Hydra awaits Koons’ arrival, 2022 will also be notable for the independent arts sector in marking the 20th anniversary of tranzit, a network of independent associations that has played an important grassroots role in supporting emerging art scenes across central and eastern Europe.

Co-founded by ERSTE Foundation — the main shareholder of the Austrian financial service provider Erste Group — independent tranzit organisations operate in Austria, the Czech Republic, Hungary, Romania and Slovakia with a remit that focuses on art’s role as a key node in civic society.

As tranzit’s mission statement outlines on its website, the network believes “in the relevance of contemporary art institutions as places of liberty, as egalitarian spaces of unbiased, poetical and political research and education… in experimentation; in resistant, locally rooted, cross-border cultural practices; and in the risk of incomplete theory.”

Speaking to Euronews, the CEO of ERSTE Foundation, Boris Marte, says that while the original motivation behind tranzit was to offer “an alternative to the post-socialist institutional art system”, the core idea of “small, but powerful organisations” that “avoid hierarchies” remains as relevant today.

Each of the network’s parts, Marte continues, “should be able to react fast on urgent issues, to connect the art world and civil society, bridge grassroots and institutional levels, and bring underground/avant-garde initiatives to museums, creating visibility for projects overseen by the power structures of larger institutions.”

In performing that role over the last two decades, Marte suggests that tranzit has created a “unique space for art” in the CEE region, “functioning as parallel structures to the existing institutional system, experimenting with formats and raising taboo subjects, and connecting the local scenes to the international one.”

Asked about the importance of maintaining a separation between tranzit and the ERSTE Foundation’s commercial and corporate interests, Marte adds that, “the autonomy of the tranzit organisations is essential. ERSTE Foundation has been tranzit's main partner since the beginning and the artistic independence was, of course, never in question."

"But you should ask tranzit how they experienced the last 20 years of cooperation. Philanthropic engagement always includes the danger of dependency from funding. To avoid this uncertainty for our partners, we established a long-term partnership, with 3-year commitments and transparent funding criteria,” says Marte.

More broadly, the question of who funds independent visual art organisations and the scope of their autonomy is one that will perhaps become more pertinent as their influence continues to grow.

What is clear, however, is that on a range of levels, the independents are growing up fast.