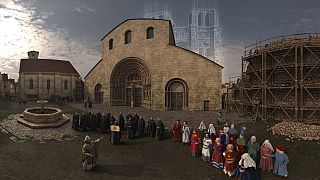 The blaze, which broke out in the early evening of April 15, 2019, stunned France alongside an even larger audience watching on their phones and TVs across the world.

It destroyed the cathedral's roof and toppled its spire, but firefighters saved the main bell towers and outer walls from collapse.

These firefighters were the Sapeurs-Pompiers, a powerful branch of the national firefighting set-up inaugurated by Napoleon himself.

And it is precisely this kind of link to history that forms the cornerstone of a new, travelling exhibition masterminded by Histovery, an experience facilitator whose content-led philosophy and affinity with Video Game technology has led to an augmented reality creation that everyone can enjoy.

The interactive experience takes the form of a 'Histopad' which, design-wise, is not a million miles away from video game controllers. Point the pad at the screen and you go back in time, beginning in the year 1160, when Notre Dame was not yet built, and the - substantial for the time but far smaller - Basilica and Cathedral of Saint-Étienne was on the current site.

The experience is enhanced by detailed research: from what 12th-century worshippers would be wearing, to art historians explaining the symbolic value of exhibits.

"We have strong links with the video games business and we use the spirit of video games, and in doing so we will catch a younger audience for a subject which is quite serious. But we are also making simple interactivity so that older people can use it and are not lost while discovering the experience," Histovery cofounder Edouard Lussan tells Euronews.

"We hope to place this exhibition in Notre Dame itself, and that's 11 million people per year," Lussan says when asked how this content can best be dispersed. "And of course we are thinking about how we can use the metaverse."

He and Bruno de Sa Moreira founded the company in 2013. And they both agree that this format is better for learning and sharing than going down the VR route.

"The problem with the headsets is that it cuts you off from your colleagues, your relatives, so the idea is to talk about it and share the experience as you take part in it," Lussan explains.

De Sa Moreira and Lussan have done this before but this is unlike any previous project.

"This particular project is different because it's a touring exhibition. We plan to go to 12 cities before the reopening of the cathedral so it's a unique opportunity to bring this experience to the world. Plus the subject itself is extremely rich and allows us to stop and tell stories at every century," says de Sa Moreira.

"When we created a histopad project for Chambord Castle in the Loire Valley we speak about the time of the Renaissance. When we did the Pope's Palace in Avignon we spoke about the Middle Ages. But here we talk about each and every century since the 12th and so it's a huge project in terms of reconstruction, research, accuracy, and documentation. It's probably the most ambitious project we've done so far."

From the earliest plans for the cathedral to actual excerpts from the firefighters in April 2019, this interactivity goes into great detail while also being fun.

The European version of the exhibition - there are also set-ups in the US and Asia - will remain at Paris' Collège des Bernardins, a cloistered gem built in the 13th Century, not far from the Cathedral, until August 2022 in partnership with the L'Oréal group.

From there it will move to Germany and then the UK.

Secrets of the Mona Lisa revealed at immersive exhibition in Marseille