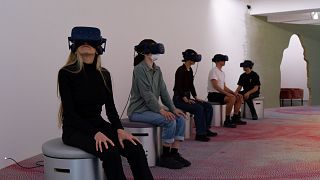 Visitors enter the alien through VR at the Serpentine   -   Copyright  Serpentine Gallery
By Jonny Walfisz  •  Updated: 15/04/2022

“What if aliens were to fall in love with us?” is the principle question “Alienarium 5” asks as you enter into a weird and wonderful new virtual reality (VR) exhibition at the Serpentine Gallery in London.

Alienarium 5 is the brainchild of French artist Dominique Gonzalez-Foerster. Alongside artists and technicians, the new show gives audiences the transcendent opportunity to virtually exist as an alien in space.

Taking over one of the Serpentine’s Galleries in the heart of London’s Hyde Park, Gonzalez-Foerster’s new artworks are a unique sensory experience. Before entering, a statue of a tentacled heart greets guests, created by Gonzalez-Foerster and Paul B. Preciado.

Around the exhibition, there are opportunities to touch, smell, and see different aspects of Gonzalez-Foerster’s alien vision. There is a scent gallery that wafts redolent alien aromas that have been created in collaboration with Barbabé FIllion. A relaxation area with a red velvet bed allows people to rest. Surrounded by “invisible Alienflowers, it carries visitors into the realm of fantasy.”

In the main exhibition space, there is a 360-degree “Meta-panorama”. The huge collage situates an image of the Earth at one side of the room and on the other, a growing party of alien and human images dance around in a party-esque vision reminiscent of the Sgt. Pepper album cover.

Influences on Gonzalez-Foerster populate the panorama ranging from the high-brow with Andrei Tarkovsky, director of Soviet sci-fi classic “Solaris” to images of the “Teletubbies”, who despite being less high concept, are no less alien. Among the many pop-culture figures, viruses, tentacled creatures, and synapses are all invited to this alien party that is in celebration of all things humanity.

“End the War” and “Aliens welcome” emblazon signs that signal the principle optimism of Gonzalez-Foerster’s work. With the colourful carpet, patterned according to an image of Uranus, the maximalism of the artwork and the whomping soundtrack created by Julian Perez, it’s hard not to feel fun wonderment.

The exhibition has been in the works since 2017. Much like how the light from the sun is already eight minutes old when it reaches us, the optimism of the original premise’s message hasn’t been hampered by the years spent without exhibitions during the pandemic.

Speaking to Euronews, Gonzalez-Foerster exclaims, “it’s the opposite, it increases the need.”

“This celebrates protest and people coming together as opposed to isolation. It has only made it [optimism] stronger,” she says.

The fullness of Gonzalez-Foerster’s positive vision of alien-friendship comes to life in the VR section that has been created with VIVE Arts.

Five people at a time are strapped into VR headsets and experience an alien world shifting and forming around them. Out in space, particles swirl around participants in wave-like form echoing quantum theories of matter. As the viewer moves their head around, it slowly becomes clear that they are participating, not background observers. The waves of particles shift and stir according to the viewer’s movement.

After a while getting lost in the flow of the space-tendrils with lights shifting in and out of view, viewers are visited by another alien. Slowly creeping through the darkness of space, its form is different from the patterns the audience has been surrounded by.

Each of the five VR headsets gives a different experience. Some of the headsets are even synced with each other so the alien coming into view isn’t just an animation, but is actually the gallery visitor sitting beside you.

Interacting with another visitor as an alien is when most realise they themselves are viewing space from the perspective of an alien. Each VR headset corresponds to one of five aliens called Endo, Filish, Astro, L-Rain and Connectom.

“VR is such a special technology,” Leigh Tanner, head of global partnerships for VIVE Arts says. By using immersive technology, visitors don’t just witness the alien ideas that Gonzalez-Foerster wants the public to see, they experience it fully.

There is something acutely alien about a VR experience that fits Gonzalez-Foerster’s concept. Considered by some the sixth sense, proprioception is the sense of space humans have. By toying with proprioception in a VR experience, Alienarium 5 adds to another experiential touch that visitors shouldn’t miss out on.

_Alienarium 5 is at the Serpentine Gallery in London from 14 April to 4 September. _