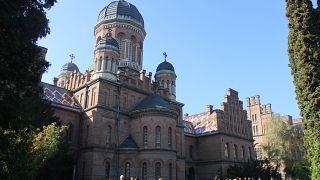 The campaign aims to help those working in the cultural heritage world as well as those who have been rendered refugees in their escape from Russian aggression.

“Today, the rich and diverse heritage in Ukraine is THE most endangered heritage in the whole of Europe," Sneška Quaedvlieg-Mihailović, Secretary-General of Europa Nostra said in a press release on Friday.

Nada Hosking, Global Heritage Fund Executive Director, followed up with a warning that cultural destruction is "often a desperate attempt to erase collective history and identity."

How does the joint initiative help?

The campaign aims to provide emergency help for people working for museums, sites and cultural institutions in Ukraine. It will also distribute the donations to organisations and individuals in Ukraine, directly or through our members and partners in Poland, Romania or elsewhere in Europe. These funds will provide emergency assistance to heritage custodians that are trying to save endangered cultural treasures in Ukraine, as well as to displaced heritage professionals, inside of outside Ukraine, who are trying to escape violence and death.

"A site which for us is of great concern is the city of Kyiv, which is a World Heritage Site. This site has two very important ensembles: the St. Sophia Cathedral and also the Lavra monastic complex. These two places are testimony to the birth of the Russian Orthodox Church."

Eloundou has urged all UNESCO member states -- including Russia -- not to target any cultural sites.

"It is important that, when hostilities are launched, countries mark with this sign, this emblem, their most important historical sites so that they are well-identified, clearly visible and are not targeted. This is what we have recommended to the Ukrainian authorities to do for their sites."

Who is behind the appeal?

Global Heritage Fund, founded in 2002, engenders creative collaborations and grassroots partnerships. The organisation achieves its goals by developing programs that aim to connect communities to expertise and funding, build resiliency amongst the stakeholders, create opportunities for local people, foster innovation and creativity, and support sustainable travel.

Opera singers gather in Lviv for rendition of the national anthem

Ink and Blood: How has Ukrainian Literature changed since 2014?