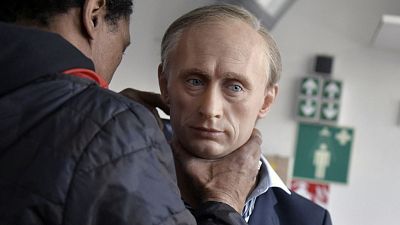 Following Russia's recent invasion of Ukraine, the Grévin Museum have removed their statue of Vladimir Putin   -   Copyright  AFP
By Theo Farrant  with AFP and Reuters  •  Updated: 03/03/2022

The Paris Grévin Museum has removed the wax figure of Russian President Vladimir Putin in protest against his invasion of Ukraine and after it was damaged by visitors over the weekend.

The statue, which was created in 2000, was moved to a warehouse until further notice and the museum is considering replacing it with a statue of Ukraine President, Volodymyr Zelenskyy.

"Today is it no longer possible to present a character like him...for the first time in the museum's history we are withdrawing a statue because of historical events currently underway," museum director Yves Delhommeau told France Bleu radio.

Over the weekend the statue had suffered attacks from visitors and was looking disheveled, he said.

"We don't want him here and the staff don't want to walk past him every day, but he was attacked a few times this weekend, and we received a few threats on the phone, so it was better to remove him from the world leaders," added the director.

"We have never represented dictators like Hitler in the Grévin Museum, we don't want to represent Putin today."