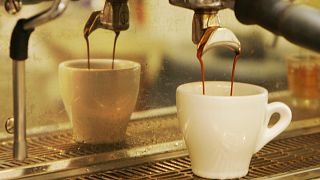 The Italian espresso is not just a shot of caffeine: it is a social and cultural ritual considered in the peninsula as a national treasure worthy of featuring on Unesco's hallowed intangible heritage list.

Italians swallow around thirty million espressos a day, from Venice to Sicily, in porcelain cups or small glasses, with or without a drop of milk. For them, it is not only a solitary pleasure, it is also a moment of conviviality.

"The espresso is an excuse to tell a friend that you care about them", explains Massimiliano Rosati, owner of the ancient and prestigious Gambrinus café in Naples, who is part of the official bid to include this ritual on the list of intangible cultural heritage.

"We drink it every day, at any time. It's a moment of sharing, a magical moment," he enthuses.

The gleaming machine enthroned behind the marble counter hisses and trembles when the "barrista" packs the ground coffee into the small receptacle that he inserts into the machine before activating a switch to run the almost boiling water over the scented powder.

What is a proper espresso?

A proper espresso is around 25 millilitres and its aroma should be "intense and rich with floral, fruity, chocolate and toasty notes," according to the Italian Espresso Institute, founded in 1998 to enroll in the marble the rules governing its making.

"On the palate, the espresso must be full-bodied and velvety, with a fair dose of bitterness", it is specified, without forgetting on the surface "a cream of hazelnut colour tending towards black, characterised by tawny reflections".

The request for world heritage registration was sent by the Ministry of Agriculture to the National Commission of Unesco for Italy, which must, in turn, submit it by March 31 to the headquarters of the UN agency in Paris.

Many Italian traditions have already been recognised by Unesco, from truffle hunting and the art of Neapolitan pizza to the Mediterranean diet and violin making in Cremona.

Drinking an espresso "is a rite, sacred in a way", confirms Annamaria Conte, a 70-year-old retired teacher and regular at Gambrinus, located a stone's throw from the famous San Carlo opera house and the seafront.

Some amateurs like to accompany their coffee with mini pizzas or small balls of fried dough covered in sugar, while chatting with their neighbors.

"When I go abroad, I see people queuing to buy their coffee, standing one behind the other, sometimes looking at their smartphones or sitting on their own in a corner with a book. That's not how it happens here", insists Rosati.

The evocation of memory

"There is a custom still alive here in certain areas of Naples: when you visit someone, you do not bring a cake or flowers, but sugar and coffee," he says.

It was Angelo Moriondo, a Turinese, who patented the first espresso machine in 1884, but it was a Milanese, Desiderio Pavoni, who was behind their mass production.

Espresso quickly became very popular from north to south of the country, with slight nuances depending on the region: more or less elongated, more or less full-bodied, accompanied by a glass of sparkling water.

At the Sant'Eustachio café, a Roman institution not far from the Pantheon, Yael Lesin-Davis, a 28-year-old tourist of British origin, enjoys a "Moretto", an espresso topped with milk froth and cocoa powder: "I I have a lot of childhood memories associated with this place where I used to come for a coffee, it's really good!"

For the owner of this café, Raimondo Ricci, a small espresso has the power to ward off loneliness even when drinking it alone: ​​"Sometimes at home, we make a coffee, and this coffee maker keeps us company by filling a room, the house", with an aroma that reminds many people of "good memories".