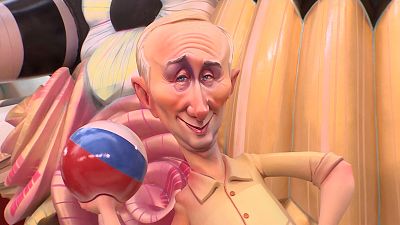 More than 700 'ninot' statues are on display in the streets of Valencia as part of this year's Las Fallas Festival.

Las Fallas is Valencia's biggest festival and takes place every March, with a riotous week of city fires, explosions and parades in honour of Saint Joseph.

Ninots are colossal statues made out of cardboard, wood, paper-machè and plaster.

This year, the war in Ukraine and the geopolitical context surrounding it is present in many of the pieces that make up the ninots.

A standout of the festival is a work depicting Joe Biden, Xi Jinping and Vladimir Putin bowling.

The ninots are usually burned on the last day of the Las Fallas festival – on a bonfire called the 'Crema' – in a centuries-old tradition.

Another highlight of the festival this year is a ninot depicting an iconic photograph taken last year of a member of the Red Cross hugging a migrant on the border of Spain.

"It's about giving the finger to everything bad, and this image represents all good things," says one of the organisers of the festival, Lourder Matt.

Las Fallas Festival starts on 15 March and runs until 19 March.

'I Am Zlatan': Ibrahimović footballing biopic hits cinemas in Sweden