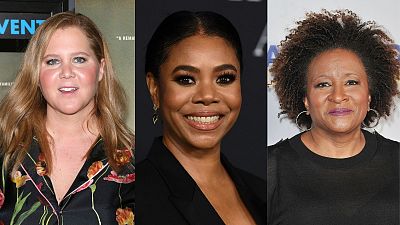 The hosts of the 2022 Academy Awards have been announced following weeks of speculation.

Amy Schumer, Regina Hall and Wanda Sykes will take the stage to preside over 94th Oscars which will see stars battle it out for the top awards the film industry has to offer.

"This year's show is all about uniting movie lovers," says ceremony producer, Will Packer.

"It's apropos that we've lined up three of the most dynamic, hilarious women with very different comedic styles."

Last month the entertainment world was aflutter with rumour after it was revealed the hosting spot for the world's most glamorous awards show would be filled after a three year hiatus.

The ceremony, which will take place on March 27th, will be the first to be hosted since Kevin Hart was dropped in 2019.

The Oscars by nature draw a lot of attention and create some magic - as well as tragic - moments.

Despite the broad and recurring controversy of #OscarsSoWhite, Hollywood’s most prestigious award show has avoided anything as fatal as has befallen the Golden Globes. However, this doesn’t mean that they haven’t made some momentous missteps that have stuck in our collective memory, and many a meme account.

Who can forget the scenes in 2017 when Faye Dunaway mistakenly presented the best film award to cast and crew members of La La Land, only for them to realise the coveted prize should have gone to Moonlight.

Meanwhile, Michael Moore hasn’t yet lived down being booed for bringing up the Iraq War whilst collecting his award for Bowling for Columbine, and Adrien Brody’s forced kissing of Halle Berry after picking up best actor for “The Pianist'' was a lowlight for the ages.

After Hart was dropped from 2019’s awards due to the resurfacing of controversial, homophobic Tweets from his past, no replacement was found.

Maybe no one of calibre was available at such short notice or perhaps the budget for screening candidates' social media histories had run out, either way the decision to find a host this year creates potential for even more memorable showbiz moments.

A host can make or break an Oscars ceremony, from the good to the bad to the just plain what were they thinking? Let’s dive into the best and worst hosts of the Oscars.

Star of “The Colour Purple'' and outspoken panellist on topical show “The View,” Goldberg has never run short of charisma and stage presence, and these qualities served her well in her four stints as host of the Oscars.

Making history as both the first African American person and the first woman to host the ceremony, Goldberg wowed audiences with her quick wit and willingness to play the fool. The actor proved her emotional range by having attendees in stitches when dressing up as Elizabeth I in the year that Shakespeare in Love was nominated, and sensitively handling the first Oscars ceremony after 9/11.

No one could accuse Goldberg of being short of confidence (she nominated herself to replace Hart in 2019), but you’d also find it difficult to prove this confidence isn’t deserved. Winner of an Emmy, Grammy, Oscar and Tony award (EGOT) Goldberg has certainly proved herself a favourite with both viewers and the Euronews Culture team.

Despite recent admissions that he slept with young women at an acting school he was running, in 2011 James Franco was one of the hottest actors around. The decision to have him host the Oscars award ceremony appears to make sense in this light, and why not pair him with talented and beloved star Anne Hathaway for good measure?

It transpires that the pair's chemistry was off, way off. Hathaway’s presentable, perky charm and Franco’s aloof and off-putting grimacing had audience members cringing. Meanwhile, the duo’s awkward jokes and lack of dynamism made the ceremony one of Franco’s most difficult performances to watch, an impressive feat in the same year he was nominated best actor for sawing his own arm off in “127 Hours.”

If only Bradley's arm was longer. Best photo ever. #oscarspic.twitter.com/C9U5NOtGap

I know what you’re thinking, is there anyone on the list that hasn’t been cancelled?

Ellen may have suffered a flurry of bad press in recent years, but back in 2014 the talk show host was still America’s sweetheart. Pre-bullying and toxic-work-environment scandals, Ellen pulled off a sweet Oscars ceremony packed with good-natured ribbing and relaxed, social media age antics that made celebs seem just like us.

DeGeneres’s experience of soft-handed star wrangling on her daily chat show proved deft when it came to her hosting skills, which peaked with the world’s most famous selfie.

During a break from handing out gold statues, the presenter entered the audience where she coaxed Bradley Cooper, Jennifer Lawrence, Brad Pitt, Angelina Jolie, Meryl Streep and Julia Roberts into joining her for a quick insta post. The photo was a hit and quickly gained over 3.3 million retweets, making it the world’s most popular tweet (at the time).

While the cutaway gags and coarse jokes may perform well with viewers on his cult creation, Family Guy, it’s safe to say MacFarlane’s brand of humour didn’t translate to the Oscars stage.

Hosting the 2013 show, MacFarlane treated audience members and viewers at home to a cringe-worthy and tasteless musical number entitled “We Saw Your Boobs”. Proving his low-brow reputation, the writer and voice-actor listed actresses who’ve appeared in topless scenes, without a hint of irony for the misogynistic culture which both required them to do it and enabled his routine.

2013 may have been a different time, before #MeToo and the plethora of rape and sexism allegations in America’s film industry, but it’s difficult to see this ever being funny.

Safe to say these days MacFarlane’s musical number would be dead in the water before rehearsals even began.

Brought in as a safe pair of hands in 2012 after the Hathaway/Franco fiasco, Crystal had a solid reputation for Oscars hosting after a clean run between 1990 - 1993.

The star of iconic films from “When Harry Met Sally” to “The Princess Bride”, Crystal’s easy charm and affable personality made him an obvious choice for host, even without considering his Hollywood pedigree.

The actor and comedian has hosted the ceremony no fewer than nine times, with one of his most memorable moments happening in 1991 when Crystal ended awards by riding off stage on a horse to promote his film “City Slickers.”

Rob Lowe - WHAT WERE THEY THINKING?

OK he wasn’t technically a host but in 1989 Rob Lowe helped to open the Oscars Ceremony by dueting with none other than…Disney’s Snow White?

In a musical number which had Americans wondering if the CIA had slipped LSD into their tap water again, Lowe sang an overtly sexual version of Proud Mary whilst dancing with a woman in a Snow White costume, to the bemusement of attending nominees.

The performance would have been harrowing enough had it not occurred shortly after a sex tape of Lowe with two women, one of whom was later found to be underage, had been leaked to the press in 1988.

The events lead to more headlines involving the words Snow White and sex scandal than Walt Disney probably imagined in the 1930s.

The 94th Academy Awards is scheduled to take place at the Dolby Theatre in Hollywood, Los Angeles, California on March 27, 2022.