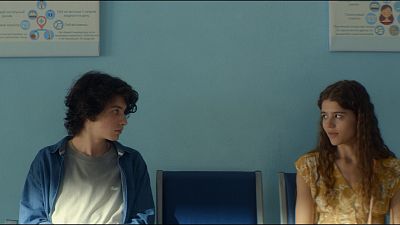 Last year’s decision made Berlinale the first major festival to award ‘Best Leading Performance’, rather than Best Actor or Actress.

Moves of this kind are being mirrored across all creative industries. The Brit Awards used this year to dispose of its male and female categories after 42 years, giving the ‘Best British Artist’ prize to Adele.

Kaptan’s performance in the surprisingly comedic drama ‘Rabiye Kumaz vs George W. Bush’ is based on the real experiences of a German-Turkish mother trying to get her son out of prison in Guantanamo Bay during the peak of the US’ “war on terror” campaign.

“I think it’s a good thing we don’t have the gender question anymore,” Kaptan told Euronews Culture after she collected her award.

“However, I was waiting for the second award and still thinking, ‘isn’t there a male coming along now?’ It’s just a crazy feeling to win.”

The award for 'Best Supporting Performance’ was won this year by Indonesian actress Laura Basuki, in ‘Before, Now and Then’ by Kamila Andini.

With just one of each acting award now available at the Berlinale, was it a good idea in an industry where prizes are vitally important for an independent film to find a paying audience?

“You wish you could give out more performance awards because there were so many wonderful performances,” says Gladiator actress Connie Nielsen, an international jury member at this year’s festival.

“But I also really respect the fact you are getting Best Performance regardless of gender, it’s wonderful to get away from gender but it does cut down on the amount of awards [...] I wish the Berlinale had a ‘Best Ensemble’ performance award. The Screen Actors Guild awards and the European Film Awards have that category.”

Actor and producer Sara Fazilat, who recently made her first feature film, Nico, was chosen as one of this year’s German Films Face to Face campaign to promote its talent globally.

Since 2020, she has been on the board of Pro Quote films, which promotes equality for all genders in the film industry.

“It’s definitely a step in the right direction,” she says. “But it’s going to show in the next few years just how intrinsic it really is. It’s certainly more inclusive for non-binary people too. We have to do it and make the change, but our audiences are still discovering these ideas and may not have quite caught up yet, they’re still discovering other aspects of diversity on screen.”

Gender has been a major theme of the festival, which opened with Francois Ozon’s gender-flipped film Peter von Kant, adapted from Rainer Werner Fassbinder's 1972 movie ‘The Bitter Tears of Petra von Kant’.

Ozon does keep the LGBTQ+ themes of the film, with actor Denis Menochet playing Von Kant as a flamboyant film director in love with a much younger male actor, while the original Petra was presented as a lesbian fashion designer.

And in the prestigious Panorama section of the festival, outside the main competition, at least three films explored themes of gender identity – ‘Into My Name’, a documentary by Nicolo Bassetti, followed four Italians as they transition from female to male. The film was executive produced by US actor and trans rights activist Elliot Page.

He says the film is centered around four working-class teenage boys and their quest to discover what masculinity could mean for them.

“It’s a story about friendship that is full of youthful energy, hope and confused feelings, and about a group of boys that feel unwelcome, but find support in each other,” he explains.

An actor is an actor

Julia Trofimova is a Russian director who’s made the poetic, boy-meets-girl film ‘The Land of Sasha’ in the Generation programme of the Berlinale, dedicated to coming of age stories.

Trofimova thinks that the gender-neutral categories at the Berlin Film Festival are “wonderful, because I don’t understand why there is a difference, they’re an ‘actor’ regardless of gender. When I talk to my actors, I definitely don’t think they differentiate between actors and actresses.”

She searched for a long time to cast her 17-year-old hero Sasha, until finding Mark Eydelshteyn (pegged to be Russia’s very own Timothee Chalamet.)

“He’s an untypical hero, I was looking for something that was not that masculine,” she explains.

“I wanted that because in our youth today, which I observe in my own kids, they’re very different from the generation before. The lines between male and female are very blurred, I see it in my own three boys. There really is a fluidity of genders and how they think about themselves, they think of life without boxes and borders inside them.”

She thinks the older generation will have to catch up with the wishes of a younger one – and that might be a good thing.

“We don’t want to be out of date,” she says. “I like the idea that even at my age of forty, it’s possible to rethink the way you think about yourself, and the roles you play about gender and sex.

“Even in the sense Russia has been fairly rigid about these ideas, but with youth in Russia, it’s totally different. It’s the same across Europe. The youth are really free.”