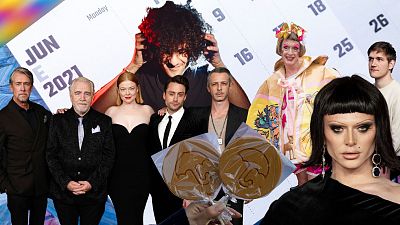 Namely, the type of things we write about here at Euronews Culture every single day.

You'd be stuck to find anybody that didn't seek comfort in literature, art, music: something tangible to keep all of the anxieties at bay.

In fact, culture has never been more essential for making sense of – and avoiding, in some cases – events that comprised one turbulent year.

Our team at Euronews Culture got together to discuss the sights and sounds that liberated and encouraged them to spark their senses.

Here's what we came up with.

I consumed a silly amount of (mostly online) culture throughout 2021, with highlights including the TV series 'Succession', the soundtrack to Bo Burnham's comedy special 'Inside' and seeing 'Dune' (in an actual cinema again!)

But when I truly consider the culture that defined my year, it has to be a piece of internet culture: The H3H3 Podcast.

Hosted by the YouTube couple Hila and Ethan Klein, they discuss social media memes and drama (for which there's been plenty) with a focus on the creator economy.

The Live streams in particular feel like you're hanging out with friends, while the weekly upload schedule has helped to keep me orientated during a year where time feels like it's melted.

At this point, who hasn’t seen or heard of Squid Game? It quickly became the most watched show in the history of Netflix, obliterating the previous records set by Bridgerton, Money Heist and Stranger Things.

The dystopian thriller, in which contestants in desperate need of money compete in deadly children’s games in the hopes of winning a huge cash prize, was streamed by 111 million users in its first 28 days.

After watching the first episode of the show, I was instantly hooked. The concept of the show felt unique and refreshing, and I appreciated everything from the acting, to the music, to the art design.

Not only did I find the show immensely entertaining and enjoyable, but it also opened my eyes to a whole new world of incredible Korean-produced dramas such as Vincenzo, Hellhound and Sweet Home. It has given me a newfound appreciation for foreign-language films and TV shows.

Described in i-D as ‘Manchester’s bespoke, misfit paradise’ (yes that’s my picture), going to Homoelectric after I moved to Manchester was a formative experience for me.

The music was on point, the atmosphere was liberating and the crowd was sumptuously, seductively fun. I went there whenever I could for the next six years. Queer clubbing became part of my identity.

So back in March 2020 the idea that I might not be able to go ‘out out’ was nothing short of a disaster.

Events like the pandemic can feel so big as to be intangible, but one real world effect I could see were the venues and clubs I loved in Manchester shutting their doors one by one.

Without nightlife my identity was pretty meaningless. It had been many, many years of framing my life around going out every weekend, and now half my wardrobe was redundant and I didn’t know what to do with myself.

I know how shallow this makes me sound, but stick with me. Queer clubbing provides a sense of community, where the otherwise ephemeral and hard to find queer spirit is solidified in a crowd.

This sense of community was a big part of my pre-pandemic life, pushing the experience of clubbing beyond hedonism and into something more meaningful. Queer spaces are a place for self-expression and self-discovery, where friendship and romantic connections are made in earnest.

Manchester’s queer scene is a place-specific expression of this ephemeral experience, heir to the legendary Manc nightlife that went before it.

My first trip back to Homoelectric was a bit like going home. It isn’t my favourite queer night in Manchester anymore, but it was my first one back in 2014. Dancing to disco and house with my friends I felt alive like I hadn’t in the last 18-months, but I also felt different.

The pandemic has changed a lot of things, but it’s also changed us. After a year-and-a-half locked in the house I’d found out other things about myself, and going to the club seemed less all-encompassing.

Going home can feel like a reset, a trip down memory lane where you find out who you used to be. It can also act as a marker to show you how different things are, and how much you’ve changed.

My trip to Homoelectric showed me where I come from, but also how far I’ve come.

Back in September this year, I went to Manchester Art Gallery to see 'Grayson's Art Club' by Grayson Perry.

It was originally a TV show on Channel 4, filmed throughout lockdown and challenging both celebrities and normal people to create art that represented their lockdown experience.

Not only was it the first time I had set foot in an art gallery since March 2020, when I went to the MoMA in New York, but seeing the exhibition at a time when restrictions were largely minimised and life had been 'normal' for about 6 months, it completely resurfaced the lockdown experience.

I think until then I had actually blocked out a lot of how bizarre it was.

For me, it was probably attending a drag show headlined by Drag Race UK megastars the United Kingdolls at London's Clapham Grand shortly after our "freedom day" in the thick of the July heatwave.

The show was my first indoor event in over a year, surrounded by sweaty, glitter-covered, rosé guzzling people screaming along to Britney, the Spice Girls, Queen and the ever-viral 'UK Hun?', aided by on-stage electric fans.

For obvious COVID-related reasons, it felt hugely significant. Myself and my friends were teary-eyed at many points because of how overwhelming the sensation of being in a room of blissfully happy people felt.

But beyond that laid a testament to how Drag Race UK has facilitated an art form here, moving drag into the mainstream, and creating actual stars. People with modelling contracts, tv shows, festival appearances and that they thoroughly deserve, emboldened by the experience of being queer.

What really summed the whole event up for me was Bimini Bon Boulash rightly dedicating her entire set to Miss Spears' conservatorship battle. Their performance of 'Everytime' was staggering.

Emotions in the room were high, but this year marks a joyful end to the saga – justice was served, and one of the brightest stars of the 90s/00s is free to live a simpler life.

More of the same victories from 2022, please.

Perhaps the most beautiful thing in the world is discovering what a particular place tastes like.

Meeting the people, learning about traditions, eating and drinking the fruits of the land. And so my favourite cultural experience of 2021 was visiting the Western Balkans. Serbia in April and Slovenia in August.

The former exposed me to the oxymoronic city of Belgrade, the cuisine of history trying to break out into a new expression, and a nation with a burgeoning wine industry.

The latter was the greenest place I've ever seen, a natural wine concentration to beat any in the world, and the development of traditions in a country with four cultures of ownership stretching from Austria-Hungary to independence. I found fabulous food, stories and new friends in both places, and cannot wait to visit again.

Happy New Year from the team!