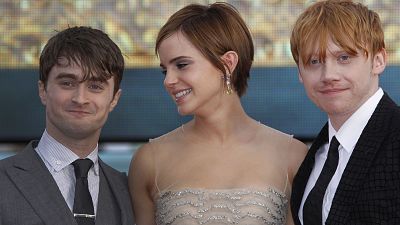 This November marked the 20th anniversary of the first Harry Potter film.

To celebrate, the cast behind the world's best-loved wizarding franchise are getting together for 'Return To Hogwarts', airing on Sky, HBO Max, and NOW TV on New Year's Day.

It'll be the first time Daniel Radcliffe, Emma Watson, and Rupert Grint have appeared on-screen together since promotion wrapped for 'Harry Potter and the Deathly Hallows: Part 2' in 2011, so naturally there's a lot of buzz surrounding the 2-hour special.

Not only that, but fans can expect appearances from Helena Bonham Carter (Bellatrix Lestrange), Robbie Coltrane (Rubeus Hagrid), Ralph Fiennes (Lord Voldemort) along with the producers and directors responsible for crafting their favourite.

There are no doubts that the Wizarding World has had a profound impact on Europe.

From what we eat, to how we think about fan culture.

Here are some of the ways the wizarding world reshaped parts of our entertainment.

Where to find it: Barcelona, Spain

There are loads of opportunities to experience food and drink inspired by, or referenced in, these films, but the butterbeer at Barcelona's 'Pudding Cafe' is said to be the best.

The frothy beverage can best be described as a less sickly butterscotch. Though the films depict it as having an alcoholic content, what you'll find here is better consumed as an accompaniment to an assortment of generously portioned Potter-themed cakes, sandwiches, and savoury dishes, along with salads and brunches for those less-fussed.

Immersion is everything when it comes to fan experiences – the most ardent of franchise followers want to feel as close to the experience as possible. With chess tables and stacked bookshelves, hundreds of thousands of Pottherheads feel at home here.

Harry and his pals certainly deserve some credit for showing eateries that there is value to be had in drawing from pop culture. Nico's Taverna – a Stockholm establishment modelled off the Greek aesthetics of 'Mamma Mia!' opened in 2016 to great success, and 'Breaking Bad' fans passing through Istanbul now have the chance to enjoy a coffee at Walter's Coffee Roastery, for some meth-free caffeine.

Sport: The Quidditch Premier League is a real thing

Where: The Netherlands, France, Belgium, Germany, and the UK

Even if you can't wrap your head around how groups of people can pretend to float on broomsticks –chasing objects that are also meant to be floating – Europe's Quidditch scene has thrived since the release of 'The Philosopher's Stone'.

First played in the US in 2005, the sport quickly made its way over to Europe. The 'Quidditch Premier League' is made up of five countries and their sets of respective teams: The Netherlands, France, Belgium, Germany, and the UK, who invented it.

Real-life brooms are attached to every player in teams of seven, competing against each other until the 'golden snitch' is caught.

Lots of universities also have teams that play each other every weekend in independent national leagues, where the game is played on a hockey-sized pitch using a quaffle made from a slightly deflated volleyball and bludgers that are actually dodgeballs.

Each game's 'golden snitch' is a tennis ball attached to a sports official, making for a cat-and-mouse chase between them and the Harry Potter of each team, the seeker.

The cultivation of this fantastical hobby and the game's open-minded approach to who can play has resulted in an unprecedented amount of people engaging in exercise that works for them – 25,000, to be precise.

Where: Paris, France and London, UK

Originally pegged as a fantasy experience just for kids, 'Harry Potter and the Philosopher's Stone' went on to gross $1 billion (€884 million) worldwide.

As time has passed, the franchise went on to awaken a highly engaged and enthusiastic fanbase of all ages. Megafans need somewhere to gather, to find new ways to engage with their interests by dressing up, meeting their favourite characters, and sharing stories with other people just as passionate as them.

The queues outside each subsequent book launch and film premiere speak for themselves.

Several Potter-specific events that take place across Europe each year. The newest, Paris's 'Remember Years Of Magic' gathering, saw people come together in Paris on December 4 and 5 to meet actors like Stanislav Ianevski (Victor Krum) and Devon Murray (Seamus Finnegan). Fans showed up in their hundreds and another event has been pencilled in for November next year.

It may seem like a step too far for some, but it's no different to fans gathering at a concert to celebrate their favourite band, or meeting every weekend to support your favourite sports team.

'Remember Years Of Magic' joins Comic-Cons across Europe in celebrating the legacy of these books and films in a way that doesn't appear to be faltering any time soon.

Education: An entire college of wizardry

If Durham University's Harry Potter module wasn't all-encompassing for you, a trip to Czocha Castle between the years 2015-2019 might have done the trick.

140 players at a time were offered the chance to spend four days in the grounds of an old-but-beautiful castle in or the price of €375. Every minute of the experience designed to make you feel like you're at Hogwarts.

Not a stone was left unturned by Dziobak Larp Studios as Potter vloggers, quirky travel enthusiasts, and everyone in between were placed into houses and taught magic like it was the real deal.

Everything was carefully designed to avoid legal action from J.K. Rowling's estate, with house names and terminology tweaked. Muggles may have been referred to as 'mundanes', but this experience was anything but.

Sadly, the company folded in 2019 after some financial qualms, firmly halting the dreams of LARP-ers around Europe.