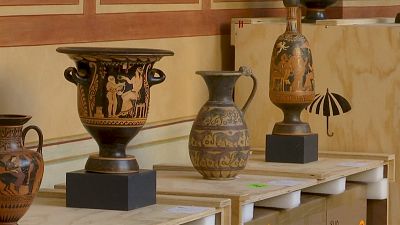 Italian officials have displayed dozens of stolen artworks that have been recovered from around the world – some still protected in wooden boxes used to ship them back from abroad.

Around 200 artworks were recovered in December after having been illegally traded to private collectors or museums in the U.S. over the last decade, General Roberto Riccardi, head of Carabinieri unit for the Protection of Cultural Heritage, told a press conference in Rome.

The Roman statues and Etruscan vases were stolen or illegally dug by traffickers in various archaeological sites across Italy.

The objects are worth about €10 million and date from the 8th century B.C. to the 1st century A.D.

Some were bought by international auction houses, galleries and private collectors, as well as museums including the Getty Museum in Los Angeles and the Fordham Museum in New York.

Italian Minister of Culture Dario Franceschini said that rather than being placed in a single museum, the pieces "will be assigned to museums in territories linked to them," in what he described as "a great homecoming operation."

This includes the South of Italy, where pre-Roman Greek and Italics civilisations flourished, as well as Tuscany and the central Italian region, which was home to the Etruscans.

Italy prides itself of being an open-air museum and in 1969 established a special force to pursue illegal artwork trafficking.

The Carabinieri unit said they recovered 23,000 archaeological artworks in 2021 and also seized thousands of fake pieces of art that would have been worth over €427 million if sold on the market.

This includes almost 800 archaeological items dating to the Daunian civilization, an Italic civilisation which inhabited Apulia region in Southern Italy in pre-Roman era, which were recovered from Belgium in June.

Check out the video above to see the stolen antiquities.