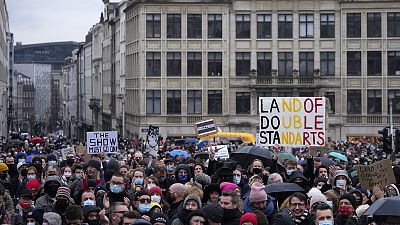 A man holds a sign which reads 'Land of double standards' as he protests with other artists during a demonstration in Brussels   -   Copyright  AP Photo/Virginia Mayo
By Euronews  •  Updated: 28/12/2021

Representatives of Belgian actors, performers and cinema operators have launched an appeal against the government’s decision to close movie theatres and other cultural centres over concerns about the coronavirus.

Under a new set of restrictions imposed over the weekend, movie houses, concert halls and art centres were ordered to shut their doors. Some stayed open in protest. The order came despite the assessment of the scientific committee advising the government that such places pose no extra risk to public health.

The FEAS umbrella association for the sector says the move is baseless, unfair and disproportionate and it, along with several cultural and rights groups, is appealing to Belgium’s Council of State, which has the power to suspend or overturn such decisions.

Thousands of workers from the sector joined together on Sunday to protest the government’s decision to close down the country’s cultural life to stem the spread of the surging Omicron variant.

Waving posters reading "The show must go on" or “No culture, no future,” a crowd of about 5,000 demonstrated peacefully despite the pouring rain, accusing the government of unfairly targeting the culture industry with new virus restrictions.

Under the measures, which took effect Sunday, events like Christmas markets are allowed to continue, despite their boisterous, chaotic gluhwein or mulled wine parties, and restaurants and bars are allowed to stay open with some new restrictions.

Even the scientific committee advising the Belgian government had not asked for the culture industry closures, leaving virologist Marc Van Ranst to ponder that in Belgium “gluhwein beat culture.”

Scores of movie theatres and other venues disregarded the closure order, according to state broadcaster RTBF.

A brass band accompanied Sunday's demonstration at the Mont des Arts in Brussels, the symbolic spot which spawned Belgian independence in 1830, and prominent cultural figures took to the stage to air their grievances.

Under the new rules, indoor public activities are strictly limited, shopping is curtailed, and sports fans won’t be allowed into stadiums and indoor venues.

However, the Belgian government shied away from a full lockdown like that imposed in the neighbouring Netherlands for the holiday season.

After almost two years of forced closures and limited openings, the culture sector had hoped its efforts, including special air quality meters in halls, separated seats, and limited visitor capacities, would allow it to escape the brunt of the virus restrictions.

The Belgian measures come despite a steady decline in COVID-19 hospital admissions in recent weeks.

The government said the fast transmission of the Omicron variant made it necessary to take preventive measures.

Belgium has had over 2 million cases with at least 28,149 deaths since the beginning of the pandemic.