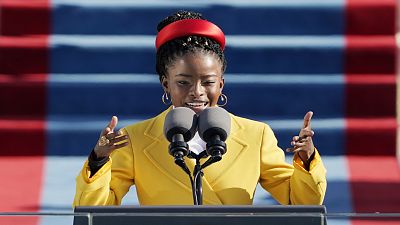 Amanda Gorman is ending her extraordinary year on a hopeful note.

The 23-year-old poet, whose reading of her own 'The Hill We Climb' at US President Joe Biden's inauguration made her an international sensation, released a new work on December 29 to mark the end of 2021.

'New Day's Lyric' is a five-stanza, 48-line resolution with themes of struggle and healing known to admirers of 'The Hill We Climb' and of Gorman's best selling collection 'Call Us What We Carry,' which came out in early December.

In it, she writes the following:

"What was cursed, we will cure.

What was plagued, we will prove pure.

Where we tend to argue, we will try to agree,

Those fortunes we forswore, now the future we foresee,

Those moments we missed

Are now these moments we make,

The moments we meet,

And our hearts, once all together beaten,

Now all together beat."

A turbulent year brought on unexpected success for the poet

Poets rarely enjoy the kind of attention the received in 2021 by the American wordsmith, who has made the cover of TIME magazine, co-hosted the Met Gala, and joined word-famous modelling firm IMG.

She says that despite this, she used her work to reflect less on her own success than on the problems facing the United States.

Gorman wrote that the "chaos and instability" of the past year had made her reject the idea of going "back to normal" and instead fight to "move beyond it."

"Whether we like it or not, we are in this together."

"To be a family, a country, doesn't necessitate that we be the same or agree on everything, only that we continue to try to see the best in each other and move forward into a shared future," she says, citing Maya Angelou's poem 'Human Family' as an influence on this work.

"Whether we like it or not, we are in this together."

Gorman offered an alliterative response when asked what inspired 'New Day's Lyric': honouring the hardships, hurt, hope and healing of 2021 while also harkening the potential of 2022.

"This is such a unique New Year's Day, because even as we toast our glasses to the future, we still have our heads bowed for what has been lost," she wrote.

"I think one of the most important things the new year reminds us is of that old adage: This too shall pass. You can't relive the same day twice — meaning every dawn is a new one, and every year an opportunity to step into the light."