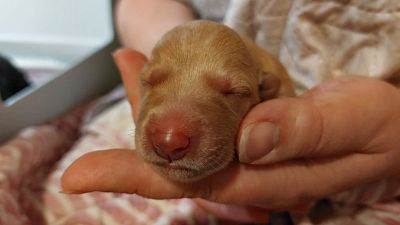 In a year full of pandemic uncertainty, restrictions and disruption to everyone's lives, there’s something very comforting about watching newborn labrador puppies curled up sound asleep with their mother.

'Puppy Live' is the latest hit ‘slow TV’ show to come out of the Nordic region, streamed on the Finnish public broadcaster Yle’s digital platform.

It gives the audience a wholesome programme to watch for eight weeks, 24/7, from before the puppies are born, to the moment the little labradors find their forever homes.

“This is the right time for this safe and fluffy and easy show, and nobody can say anything negative about it, it’s something we can all enjoy together” says Ville Alijoki, an executive producer from Yle’s science, environment and history unit.

Black labrador Akka and her litter - six black pups and two yellow - have already proved to be a huge success with audiences in Finland and further afield, clocking up more than 5.5 million views in the first two weeks alone.

Have to see what it's all about? The livestream can be found here.

How does 'Puppy Live' work?

In technical terms, there’s three cameras pointed at the puppies’ bed at their home in Central Finland, controlled remotely from Helsinki, and producers can adjust the lighting as well.

A lively chatroom finds puppy fans sharing comments and questions about the labs, and the team got so much attention they had to ramp up the amount of content they produced.

The pups also have their own TikTok account for adorable updates.

“Our initial goal was to put something on the article once a week, but demand is pretty hot so we are trying to figure out to keep it going every day with some kind of updates on the puppies” Alijoki explains.

At any given time there are around 500 people watching the puppy livestream.

“There are these true fans, and those who just pop in to see what has happened, are the puppies walking yet, have they opened their eyes and that kind of stuff,” says Alijoki.

Charting the origins of slow TV in Norway

Although webcams and observational documentaries have been around for a long time, it was Norway’s public broadcaster who first pioneered long-form, unedited, slow TV.

The earliest example, a seven-hour train journey from Bergen to Oslo in 2009, was shown on NRK2 as a pre-recorded event, but later programmes would be live: including hours and hours of salmon spawning; logs burning on an open fire; knitting a sweater; choirs singing hymns; lectures from academics, and a hike in the wilderness.

But the genre really caught the attention, and imagination, of audiences in Norway with a days-long live broadcast in 2011 from the Hurtigruten boat as it sailed 134 hours up the Norwegian coastline.

“You may say that the Hurtigruten broadcast, as it took several days, it developed and got more popular,” says Professor Roel Puijk from the Inland Norway University of Applied Sciences in Lillehammer, who recently published a book about the slow TV phenomenon.

“Hurtigruten is very well known, it has a high symbolic value in Norway, and people became more aware so after a while, they gathered in the harbours when the boats came and did performances of singing and dancing”

In a sense, the viewers were able to make their own television content on the quayside, as cameras on board the ship caught the action and beamed it around the country.

“It’s been one of the most popular entertainment programmes in Norway, it’s a success, so I’m not surprised that others also tried it. I think it’s quite a public service concept, and would be more difficult to produce with commercials” Professor Puijk adds.

Why do audiences love enjoy it so much?

It seems that no matter the subject, there is an enduring appeal for audiences in watching slow TV, which has only increased as technology makes broadcasts sharper, brighter and bigger.

“I think a lot of the appeal of slow TV in that Nordic tradition is partly that appeal of going far and seeing far from the comfort of your home, and seeing sights you wouldn’t see anywhere else,” says Dr Amy Holdsworth, Head of Film and Television Studies at the University of Glasgow in Scotland.

“But it’s also partly this sense of community, about gathering a large group of people to watch synchronously” she adds.

"There is that possibility there might be something that goes wrong, or you might see something unexpected"

Because slow TV isn’t structured tightly in terms of narrative, it’s easier too for casual viewers to tune in and out over the course of several hours, days or even weeks, without feeling they’ve missed some important plot point.

On live unscripted television though, surprises can and do happen, another draw for the audience.

“With the really long-running ones, particularly the ones outside in the landscape, there is that possibility there might be something that goes wrong, or you might see something unexpected,” says Dr Holdsworth.

It might also mean that nothing at all happens, like on Swedish public broadcaster SVT’s 'Great Moose Migration' programme in summer 2019.

Over the first five days of broadcasting, not a single moose was spotted on any of the 22 cameras set up to cover their migration to the northern pastures - but even this became a reason for viewers to watch, hoping to be the first person in the country to finally spot an elusive moose.

A chance to watch the puppies grow

Back in Finland, the puppies have just celebrated their one week birthdays, and now have different bright coloured collars to identify each individual.

They’ve been weighed - even the smallest one has gained 130g in his first week of life - and fans are engaged in the chatroom suggesting names, and discussing the different personality traits they see emerging even at this young age.

“We weren’t quite prepared for this level of interest in it” admits Yle’s Ville Alijoki.

“But of course, everyone loves puppies.”