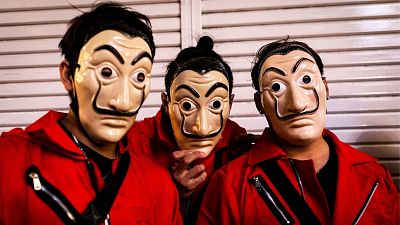 The crime thriller has captured millions around the world, laying a framework for accessible foreign-language hits that the likes of South Korea's 'Squid Game' and another Spanish production, 'Elite', later capitalised on.

Whether you've been waiting for this moment for years or a curious new fan, here are five key things to know about the global phenomenon's success.

1. The show initially had a disappointing audience debut

The first episode, broadcast on May 2, 2017, was seen by more than four million viewers.

By European standards that is a certified hit.

However, the show struggled to retain that audience and only 1.4 million people watched the last episode to air on the network later that year.

This is where Netflix came in – by acquiring global streaming rights, they cut the series into 22 smaller episodes that were divided into two separate releases for suspense.

Opening up the show to a whole new audience paid off significantly.

It didn't take long for an international buzz to surround the show, giving its creator Álex Pina a platform to build an ambitious web of stories exploring our frenzied, often dangerous relationship with money.

2. Its outfits are now associated with protest movements...

Like many countries, the 2008 financial crisis traumatised Spain and forced the state to inject billions of euros into the country's banks.

This served as a springboard for the series, making its heroes, the bank robbers, sympathetic in the eyes of the public. Suddenly it was cool to be an anti-system rebel.

Red overalls and Dali masks are now a famed piece of anti-establishment iconography, often cropping up at protests.

Not only this, but series' main song, 'Bella Ciao' – the Italian Partisan resistance hymn during WWII –has regained its former glory.

In December 2020, a group of hooded men robbed a bank in Cruciúma, in southern Brazil, using a modus operandi similar to that of 'La Casa de papel'.

Heavily armed, the criminals blew up the agency's coffers with explosives. Banknotes were strewn in the air as the gang fleed.

Residents then came to collect the money, hampering police action.

4. A tale of many cities

In the series, all the robbers identify themselves by city names.

The idea began with a T-shirt worn by series creator Alex Piña with the word 'Tokyo' written on it. The Japanese capital became the baptismal name of Silene Oliveira, played by Ursula Corbero.

Each robber went on to be named accordingly – Lisbon, Nairobi, Berlin, Moscow – somehow making them seem even more hardcore than they did before if that was possible.

It is common in Madrid to see admirers of 'La casa de papel' taking photos in front of the National Currency Factory, where the main action of the series takes place.

But for security reasons, the exterior images of the building were shot in front of another institution, with a similar architecture: the Higher Council for Scientific Research (CSIC).

The same goes for the images of the roof, filmed on the terrace of the Higher Technical School of Aeronautical Engineers, in the west of the Spanish capital.