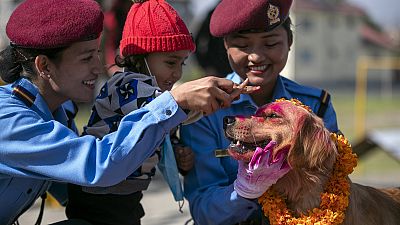 On Wednesday, the second day of the five-day Tihar festival, Hindus gathered across Nepal to worship their dogs.

Adorned with colourful garlands and tilaka, all dogs - including strays - are gently bathed by families and served selections of milk, meat and more.

It is considered a sin to be disrespectful to a dog on this day.

Why are dogs celebrated?

For devout Hindus, the celebration (named Kukur Tihar) is tied to a belief that dogs are the messengers of Yamaraj, the god of death, and that by worshipping the animals and ensuring their happiness, Yamaraj can be appeased.

It also helps them to see death in a more positive light, as people thank dogs for their loyalty and companionship.

What is the Tihar Festival?

Kukur Tihar falls on the second day of the Tihar festival, which is a five-day-long Hindu festival of lights, celebrated in Nepal and by the Nepali diaspora.

Traditionally, each of the five days of Tihar are dedicated to the worship of different animals - all associated with the Hindu god of death.

On day one, crows and ravens are fed atop Hindu rooftops, while on day three, cows are worshipped as symbols of prosperity.

Day four favours oxen and day five is dedicated to people, with sisters traditionally putting tilaka on their brothers' foreheads in the belief that it will secure a long and happy life.