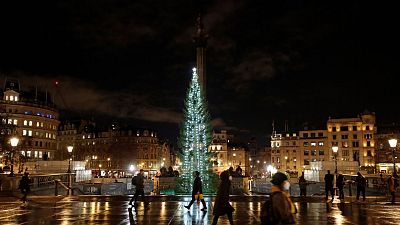 Every year since 1947, Norway ships over a homegrown Christmas tree to London to create the centrepiece of the capital's Trafalgar Square festive display.

It symbolises the country's recognition for Britain's support during World War II.

The trees are 25 metres in height, and often selected months, if not years in advance.

A special ceremony even takes place in November where political figures attend the felling of the tree.

This year, many Brits are under the impression that something is awry, given the underwhelming stature of Norway's latest 'gift'.

Don't believe us? Take a look for yourself.

How did this happen?

As you can see, it's not the most conventional example of a traditional Nordic fir tree.

The internet has been in a near-permanent state of mockery ever since. Many couldn't help but feel that it was a little...lacking?

When's the other half coming https://t.co/JMUcaOOWm5

Have we fallen out with Norway ?!

Amazing how they got Nelson to balance on top like that!

Norway has not taken the sacking of Ole Gunnar Solskjaer well

Good grief, has it got a hangover?

I can’t help feeling this is some kind of depressing metaphor for the state of the country. Ours, obviously, not Norway.

One British journalist going as far as to ask: is Britain at war with Norway now?

Are we at war with Norway now? https://t.co/UDfWBx11in

Jokes about failed Hermes and Interflora deliveries swirled around the internet, so much so that the latter company's social media team had their work cut out for them distinguishing where the real complaints were.

They didn't always get it right.

Dear Fin, please DM me the order number and the billing address and the your full name and the name of your recipient so I may resolve this best wishes Jackie

But this was cleverly rectified.

Might have been too focused on missing plant food and didn't clock the poor tree?woops! Our sachets are amazing, but not sure even they'd do the trick here...! Jackie

Dan Barker returned to Twitter the following day to provide an update of what the tree looks like in daylight.

It seems as though nothing can save the public from thinking it's either: A) a joke or B) a message from Norway that Britain has done something to upset them.

Has anyone worked out what we did to the Norwegians this year to upset them this much https://t.co/OsGmMJsdyE

the EU took half in the divorce https://t.co/ebybRfYI0R

Pictures of this tree are giving me the proper giggles, look at the state of it! https://t.co/fBDrZ2aqf2

Some keen Christmas tree-watchers have this is part of a wider pattern.

Genuinely one of my favourite Christmas activities each year is guessing how underwhelming the Trafalgar Square tree is going to be https://t.co/4C8aZBqqo0

More so, when you compare it to other trees across London.

It must be noted that many of Europe's grandest Christmas displays – including other London locations – are composed of several trees to bulk them up.

A mixed reception to the Trafalgar Square tree in the replies to this tweet.

Here it is alongside the other Westminster trees:

Ultimately, it's a pretty solid summary of how 2021 panned out for most of the country.

Everyone is complaining about the trafalgar square christmas tree like it isn't a perfect representation of this year and doesn't look exactly like how we all feel. pic.twitter.com/ZFwg2J9eQ0

Not everybody took glee in being unkind about London's latest festive addition.

Richard Wood, the British Ambassador to Norway (insert Beatles joke here) has some defensive words to say about the situation, having been present for its selection.

His defence was that "Twitter isn't real life", suggesting images of the tree had been misrepresented.

Though it's clear to see the tree does look a lot fuller in his video, shot a month earlier, is it possible some damage was done on its journey?

Good job Twitter isn’t real life!!
The Trafalgar Square Christmas tree is appreciated by the vast majority. And is an amazing gesture from the people of Oslo.
Looking forward to the lighting tonight!
(Below, the tree coming from its Norwegian forest?) pic.twitter.com/1RaUMDOvWP

Others assembled to defend the tree's unconventional appearance. It's not very British to moan in the face of mediocrity, after all.

People are being very rude about the Trafalgar Square Christmas tree, aren't they? Isn't the British way with slightly underwhelming presents to pretend we thought it was great and roll with it? My mum once made me write and thank a relative for a calculator ffs

I was there 2 weeks ago for the tree felling ceremony, a very proud moment for me but also Norway. We must always remember why this happens, also you’d probably need to drop out a little on one side if you weighed several tons and had a 2 week journey. It’s Christmas people ?x pic.twitter.com/Y91rCgw2i7

And the tree agreed, using its new fan club as a prime opportunity to promote its lights being switched on at 6 pm Thursday night.

I could not agree with you more #TrafalgarTree don't forget to join us at #TrafalgarSquare at 6pm to see my #ChristmasLights switched on ?⭐️? https://t.co/1wzpuB6C7Y