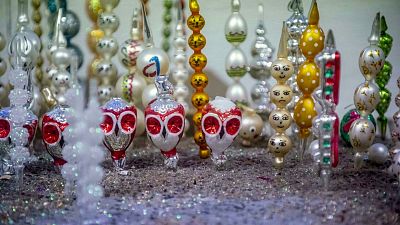 Sparkling with colourful glitter, the small glassware shop in the Czech mountains lights up a grim, foggy day, as Christmas shoppers stream in to buy their handmade blown-glass beaded decorations.

The decorations come in all shapes and sizes, including stars, angels, snowmen, Santa Clauses.

The small glassware company are situated in in Poniklá, a village in the northern Czech Republic.

The 'handmade production of Christmas tree decorations from blown glass beads' earned a place on the UNESCO list of intangible cultural heritage last year which gives the practice a far better chance of survival.

The practice has survived until today solely in Ponikla, whose local tradition has roots in a 19th-century love affair.

"A certain Mr Hajna fell in love with a local maid, they got married and he brought the very basics of the craft to Ponikla," says Marek Kulhavy, owner of the local Rautis factory, the only one left.

Hajna came from a nearby region where glass making had already flourished, and the craft spread fast as his neighbours were quick to learn it to make their living in the poor mountainous region.

Stanislav Horna opened the current Rautis factory in 1902 to produce fancy trimmings for clothes and costumes and met with great success, employing as many as 200 glassblowers at one point.

The company managed to stay afloat even after an act of espionage forced it to redirect its focus to Christmas ornaments.

"In the 1920s, a group of Japanese industrial spies disguised as tourists copied the process and started to produce the trimmings, taking the eastern markets away," Kulhavy told AFP.

"The warehouses were full of beads and somebody decided to start making Christmas decorations as Christmas trees were a hit at the time."

In 1948, all of the glass factories were nationalised as the Communists took power in the former Czechoslovakia, and Horna's son was even thrown into prison like many entrepreneurs.

But the business benefited from the move as the Communists limited blown-glass bead manufacturing to Ponikla.

"It was a blessing in disguise," says Marek Kulhavy, the current owner of the company.

"Glass beads were always on the fringe (of glass production) and they lived their own life even during Communism as nobody was really interested in them and so the business survived."

Shortly after the Communist regime was toppled in 1989, Kulhavy's father bought the Ponikla factory which currently employs 50 people.

How are the blown-glass beaded decorations made?

Production begins with a glass pipe which is heated and shaped by blowing inside a mould. The plant has more than 1,000 patterns, according to Kulhavy.

The shaped pipe is silvered from inside with a solution and then dyed from outside, before being cut up, threaded with strings and turned into an ornament.

"When you cast light on a star, it simply shines."

UNESCO listed the production as a "specialised and technically demanding" craft, hailing the factory for safeguarding the tradition as the sole survivor.

"Glass beads were always a Cinderella. They entered the spotlight thanks to the listing," Kulhavy said.