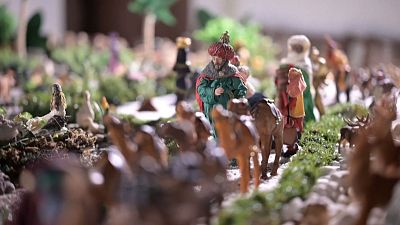 Each year, Iria Maria and her husband Joao de Castro spend months assembling more than 1,500 pieces to create a huge nativity scene at their home.

The couple's house is one of more than 40 in Santa Lúcia, Brazil, to open its doors to show off their creations during the Christmas period as part of the city's 'Nativity Circuit'.

"It's a very important thing in our lives, I've always thought. And many people associate us with the nativity scene, so they say: it's that couple that makes the nativity scene. So we have become very attached to it" says Iria Maria, as she puts together the final pieces at the Brazilian couple's home.

Joao de Castro explains that the nativity scene has long been a tradition in his family.