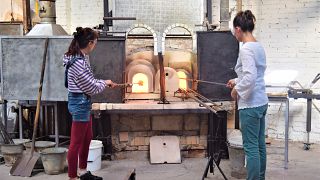 Giancarlo Signoretto has been working in the glass furnaces of Murano, an island 15 minutes from Venice by waterbus, for over 40 years.

But in the last three, he’s had to face some of the most challenging conditions for the 1000-year-old art yet.

After destructive flooding in November 2019 and then a dearth of clients as the pandemic halted tourism, the glassmakers of Murano are now struggling with soaring energy bills.

Gas prices have been rising since last year, particularly as the end of COVID lockdowns saw a sudden surge in demand. Now, the war in Ukraine means dwindling imports of gas from Russia and staggering energy bills that have been the final blow for several hot shops on the island.

“In the 42 years I’ve been working here, I’ve never seen bills like this,” says Signoretto, now a renowned Murano glass master. His most recent statement showed an increase of around 400% compared to last year. Signoretto could choose to shut down the furnaces temporarily as several other workshops have, but it’s not a simple decision.

“We have never closed, not even during the pandemic,” says Signoretto as he spins a rod inside the roaring furnace, “and I won’t turn off the furnaces now because it feels like defeat and I’m worried I’ll never have the strength to turn them back on.”

Shutting down and then restarting a furnace is not a simple matter of flicking a switch. Running at over 1000℃, they take many days to cool down and be rekindled. In addition, the crucible, a ceramic basin inside the furnace where the molten glass is held, cracks during the cooling process and must be replaced. To extract the broken crucible, the whole brick front of the furnace must be removed and then rebuilt once the new crucible has been installed. “For this reason, closing temporarily never means for a couple of weeks, it means at least for several months,” says Signoretto.

At Wave Murano Glass, a new studio run by 32-year-old Roberto Beltrami that opened in 2017, three out of five of their furnaces lie cold and dark. “We’re trying to save as much energy as possible and be really efficient,” says Beltrami. “I don’t know when or if we will turn these furnaces back on.” This month, their gas bill was three times higher than normal. It is a similar story throughout the island’s glass workshops.

Around 40% of Italy’s gas supplies arrive from Russia and natural gas makes up around 45% of the country’s energy use. With energy costs already spiking as a result of the pandemic, Italy now has serious concerns about energy security and further increases in costs following Russia’s invasion of Ukraine.

On Murano, glass workshops consume vast quantities of gas, so even a slight rise in prices can have a significant impact on bills. At Wave, for example, their furnaces require as much as 40,000㎥ of gas per month.

Luckily, Beltrami and his team at Wave currently have a big order to work on. “We’ll probably still make a loss in these months, but at least we won’t close completely.”

Beltrami maintains that it is vital, even in times like this, to show clients that the workshop is remaining active and consider the loss of income in these months as an investment for the future.

It’s a different story at El Cocal, which has been making headlines for becoming the first all-female glass workshop in the history of Murano.

Chiara Taiariol and Mariana Oliboni opened in last year. This February, a three-month gas bill of nearly €52,000 arrived, compared to around €7,500 last year. “We were expecting a substantial sum, but not that much,” says Oliboni.

Some financial aid has arrived from the Veneto region for El Cocal and other studios, but the funds ran out in February and show no signs of being offered again. As such, Taiariol and Oliboni made the arduous decision earlier this week to close temporarily.

“We’re a new business that opened during a really difficult time,” Oliboni says. “We managed to struggle on during a pandemic but with the exorbitant gas prices we’ve had no choice but to close.”

Signoretto confirms the gravity of the situation on the island. “I know of several workshops that have chosen to close for the time being and I understand why,” he says, “but I’m worried many of them will never reopen.”

Signoretto and his assistant Agnese Tegon, another of the few women to work in Murano’s furnaces, are managing to remain open because they have a large-scale order they are working on. Signoretto maintains that in order to survive, glass workshops should be focused on producing a small number of important artworks and sculptures rather than churning out lower-priced tableware and ornaments. “I create pieces that represent months of work and of income, so in a period like this I am more secure,” he says.

At Wave, Beltrami has chosen to invest in new energy-efficient furnaces to prepare for potentially long-term elevated gas prices. “Even if prices go down,” he says, “they’ll never go as low as they were before.”

One furnace has already been installed and is able to save costs by recycling more of the heat that is emitted from the furnace. “It consumes around the same as a small furnace but has double the capacity,” says Beltrami. Another that will be arriving shortly should have such low running costs that he will be able to recover the original investment in one year.

Unfortunately, innovative technology cannot extend to seeking out a different and cheaper source of energy. “If you take electricity, for example, one blackout and a day’s work and thousands of euros are lost,” says Beltrami. For the moment, then, Murano’s glassmakers remain at the mercy of the fluctuating gas prices.

'It's not a job, it's a disease': meet Italy's rebel cheesemaker

The real story behind the Czech Christmas glass beads