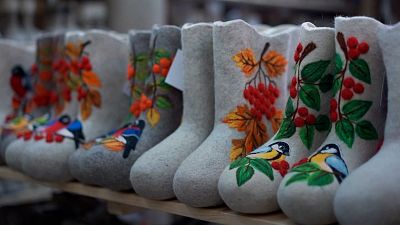 As winter temperatures begin to plummet across Russia, some sensible footwear might be in order in the Siberian city of Novosibirsk.

A felt boot maker, thought to be the last of his kind in the city, is determined the demanding manual craft will remain, long after his last boot is rolled.

12 years ago, he began learning the skills of felt boot making, from speaking with masters and sheep breeders. He attended courses in felt boot making in Biysk, and in 2010, he opened his own felt boot workshop.

How are the felt boots made?

The manufacturing process starts with sorting and combing the wool, then making a blank or base for would-be boots. It often looks much bigger than the final product.

The boot – traditionally known as a Valenki – is then soaked in hot water and rolled manually with the help of special tools, such as a chipper.

Lapin says it can take a whole day to make a pair of felt boots in this way.

Lapin is one of a few masters who keep the tradition of manual felt boot making alive, compared to modern factories which - he says - cannot achieve the same level of quality.

The felt boot maker says there are only nine such masters in Siberia, he's the only one in the Novosibirsk region.

He says by not using chemicals, manual production preserves the quality of the wool.

What can be found in Lapin’s felt boot store?

The decorations are handmade by assistants, about 40 people in total.

Lapin's store also acts as a kind of museum. Visitors can see a 19th century wool combing machine, among other items.

The felt boot maker hopes to preserve the craft and pass it on to future generations.

Check out the video to see how Ivan makes his felt boots.

Young and old amongst nominations in diverse Grammys announcement