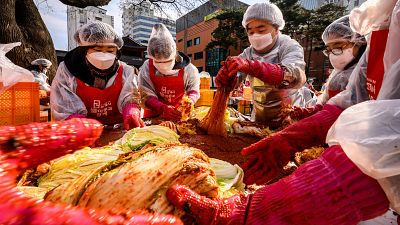 More than 150 people joined Buddhist monks at the Jogyesa temple in Seoul, South Korea to take part in a mass union of kimchi making.

This event takes place annually, but was not held the last two years because of COVID-19.

Half of the kimchi prepared Jogyesa was given to low-income families and the elderly in need assistance. The rest was given to the temple which organised the event and other Buddhist organisations.

Eight thousand kilos of cabbage were used to the make the sour, spicy national dish this year.

"We are holding this kimchi making event to give hope and encouragement to the elderly in need, to those who live alone and to people who are suffering because of the coronavirus" says Wonmyeong, vice-Head Monk of the Jogyesa Temple.

What is kimchi and how is it made?

Originally a means of preserving the vegetable during winter, kimchi is emblematic of Korean cuisine and accompanies almost every meal served in the country.

While there are many different variations of kimchi using different ingredients, the most common style is made with cabbages.

'Gimjang' – the preparation and preservation of kimchi – has been recognised by UNESCO as a world heritage asset.

South Koreans regard it as a representation of the nation's communal spirit.

Check out the video above to see their mouth-watering methods take place.

Squid Game confirmed for second season due to 'so much demand'