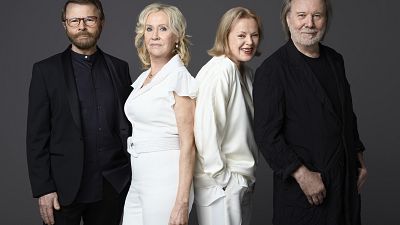 ABBA receive their first Grammy nomination for comeback single "I Still Have Faith In You"   -   Copyright  Baillie Walsh/AP
By Tim Gallagher  •  Updated: 24/11/2021

Nominees for the Grammys were announced on Tuesday night with awards on the cards for young and old -- the age range of potential winners ranges between 18 and 95.

Meanwhile, retirees stand to win big with awards on the cards for Tony Bennet and the much-talked-about and newly reunified ABBA.

Bennett, who already has an impressive 18 Grammy wins, is nominated with Lady Gaga for their version of “I Get a Kick Out of You.”

For their part, ABBA received their first-ever Grammy nomination for their comeback song “I Still Have Faith In You.”

The awards are set to be diverse with black female artists Doja Cat and H.E.R both receiving eight nominations. Queer artist Lil Nas X’s “MONTERO” is up for best album, along with best music video and record of the year.

The most nominated artist overall is multi-genre performer Jon Batiste. The artist, who leads the band on Stephen Colbert’s “Late Late Show”, scooped 11 nominations including best score for visual media for his oscar-winning work on Pixar’s “Soul”.

Batiste is also nominated for best R&B album for his album, “We Are”.

After the nominations were announced, Batiste told the Associated Press, “"I’m just really happy that we were able to make something in complete artistic integrity and have it be recognised.”

There were also awards for big names and long-standing artists. The Weeknd received three nominations after previously saying none of his music would be submitted, and Justin Beiber received eight. The former teen-star will battle it out with Taylor Swift, Lady Gaga and Kanye West for album of the year.

Is this traditional Siberian felt boot maker one of Russia's last?