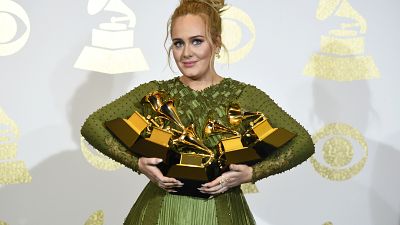 10.3 million viewers tuned in to Adele’s performance where she debuted new music, facilitated a marriage proposal and caught up with Oprah Winfrey about her divorce.

According to the Neilsen company, the CBS show almost outdid the audience numbers for the Oscars ceremony in April which attracted 10.7 million viewers, including those who watched on tape in the following week.

It is anticipated Adele will exceed this number when her own post-match viewers are counted.

Adele also trounced one of the other most-popular musicians of the moment - Taylor Swift. Swift's 10-minute performance of her song "All of Me" on "Saturday Night Live" reached 5.8 million viewers, and the clip has already been seen more than 2.5 million times on YouTube.

Both Adele and Taylor Swift are releasing new music at the moment, causing waves amongst critics and fans alike.

Adele’s new album, 30, is her fourth studio album and is set for release on November 19. Highly anticipated, it will cover Adele’s divorce and be her first new release since 2015.

“Easy on Me” the first single from 30 has had 160 million views on YouTube and became Spotify’s most-streamed song in a day within 24-hours of its release, shattering the record held by K-pop group BTS.

For her part, Swift is currently re-releasing all her old music after a dispute with her old record label Big Machine and manager Scooter Braun.

Big Machine sold the master’s tapes of Swift’s original music to a private equity firm. The tapes earn money every time one of Swift’s songs is streamed and Swift is re-recording her previous six albums so the masters will be under her own control.

Swift also claims she was repeatedly bullied by Braun.