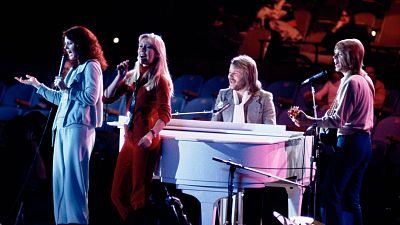 ABBA's Benny Andersson and Bjorn Ulvaeus have confirmed that the group's comeback record will be their last new music as a band.

The Swedish quartet are set to release their new album, Voyage, next month ahead of 'performing' groundbreaking shows via animated avatars in London next year.

However, the group's songwriting duo insist this will not be the start of a full reformation and that they and bandmates Agnetha Faltskog and Anni-Frid Lyngstad will not record together again.

Concluding one of pop's most influential groups

The band's original breakup in 1982 is shrouded in a degree of mystery as they never officially announced a split, but the musician said this will be a definitive end to ABBA.

"I didn't actually say that 'this is it' in 1982," he explained. "I never said myself that ABBA was never going to happen again. But I can tell you now: this is it."

Ulvaeus then nodded in agreement and said, "Yeah."

The decision to call it a day following the album is not down to any issues within the band, however, as the Chess composer insisted the group really enjoyed recording together again as they felt no pressure to match earlier hits like Waterloo and Super Trouper.

"It was just fun, really, to try and see if we could do something," he added.

"I think everyone was completely aware that if what we did was not up to the standard that we all wanted, we would just forget about it. There was no pressure in that respect."

ABBA were 'the enemies' in Sweden during their heyday

The group's original recording career spanned a decade, producing eight albums of pop filled with celebration, yearning, and everything in between.

After topping 150 million global record sales and enduring nearly 50 years in the spotlight, it's hard to believe the band weren't always treasured by their home country.

Ulvaeus believes the band were disliked by the "progressive movement" in Sweden when they first emerged on the scene.

Winning Eurovision came two years into their career was only the beginning of altering that perspective.

"You know, in Sweden, there was this progressive movement in music, and we were the enemies."

However, the band didn't worry too much about the reaction there, as they became of one of the world's most-loved pop groups.

"Because we got so much response from the whole world. Right from the start, we had contemporary colleagues, musicians, who liked what we were doing."

They plan to continue to defy industry norms with the long-awaited 'Voyage', which arrives November 5.

"We decided early on that we’re not going to look at anything else," Andersson said of the current pop landscape.

"We’re just going to do the songs, the best songs we can right now. That meant writing lyrics I could get some of my thoughts of these past 40 years into, and add some kind of depth that, hopefully, comes with age and that makes it different from the lyrics I wrote 40 years ago."

Abba return to the recording studio