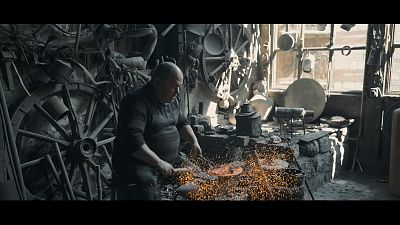 The Azerbaijani village of Lahij lies in a gorge of the Nial mountains, about a three-hour drive west of Baku. Its narrow cobbled streets, houses made of stones from the river, workshops and stores look just as they did centuries ago.

Lahij has long been known as the village of artisans. Crafts including leather production and carpet weaving are practiced there. However, it is the coppersmiths that made Lahij famous. Highly ornamental, locally manufactured copperware is the symbol of this small village.

Kebleyi Aliyev is a coppersmith who lives and works in Lahij. He tells us that his workshop is 300 years old. It was opened in 1725 and is still operational today. His great grandfathers, uncles, their children and all his ancestors have laboured in his workshop. Kebleyi himself has worked there since he was five years old and now at the age of 50, he explains that his children will be the 8th generation of his family to work there.

In 1923, there were over 200 operational copper workshops in Lahij

Copper manufacturing is one of the oldest forms of metalwork. The practice of forming and decorating copperware dates back thousands of years, to not long after people first learned how to extract this metal from the ground.

The methods and practices of this craft have changed little over the years. Local coppersmiths still use traditional tools like sledgehammers and chisels. It's hard work that requires strength, stamina, and patience.

Haji Aliyev is another copper artisan. He deals with the decoration and ornamentation of tableware after Kebleyi has shaped the dishes from raw copper and covered them with a layer of tin. He explains that each dish is unique, "you can’t keep applying the same pattern to every dish."

His inspiration comes from the dishes themselves. The only tool he uses is a chisel. He doesn't even trace or outline a drawing before he begins, he imagines it in his mind before he starts inscribing.

Today, copper tableware made in Lahij is on display in some of the world’s most famous museums, including the Louvre in Paris and it's highly valued locally too. As Kamal Aliyev, the director of the Lahij State Historical and Cultural Reserve says, they know that copper art in Lahij dates back centuries. There is evidence that tableware was even made there in the 11th century. "Apart from that, in the various regions of Azerbaijan, archaeologists have discovered copper coins that were manufactured in Lahij during the Middle Ages", he adds.

In 2015, copper craftsmanship was inscribed on the UNESCO Representative List of the Intangible Cultural Heritage of Humanity.