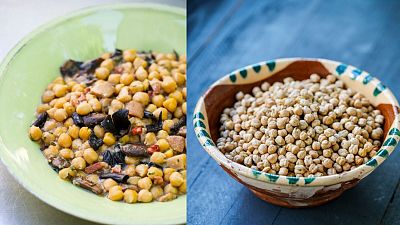 Portuguese cuisine, Chef Castro e Silva explains, is far from being pompous, and it is rather a cuisine of the terroir: rural, rustic, and with grain is one of its stars.

The stew is rich in protein, minerals, vitamins, folic acid, calcium, iron and magnesium, and as if these attributes were not enough, the grain also has tryptophan, which is used to produce serotonin, a chemical substance in the body that induces a feeling of well-being.

Tip: Mushrooms, when out of season, can be used frozen or dehydrated. The latter is perhaps the best option to preserve flavour.

Miguel Castro e Silva runs the kitchen at both Casario, a Porto-based restaurant exploring Portuguese gastronomy and Port and Douro wine; and at Quinta de Ventozelo, a beautiful farm up the Douro River which focuses on the regional gastronomy of the Douro and Trás-os-Montes. Quinta de Ventozelo was recently lauded as one of the three best hotels in the world for gastronomic getaways by the National Geographic Traveller. Castro e Silva is also the Executive chef at Restaurante Decastro Gaia, located in Vila Nova de Gaia.

He recently published a book called Na Cozinha de Miguel Castro e Silva which takes a new look at 48 fundamental ingredients in Portuguese cuisine. This recipe is one of the featured ones in the book.

The history of the dish

When the chef presented this stew in France a few years ago, the first reaction was one of incomprehension. Crowds were taken by surprise by the improbable union between fancy fungus and the ordinary grain. But they would come to like it.

What is most present in this dish is the historical resourcefulness of the poor. Mushrooms were caught in the compost, and the grain seeds were always there. The addition of onions, parsley, olive oil, bread and bacon transformed it into a delicacy.