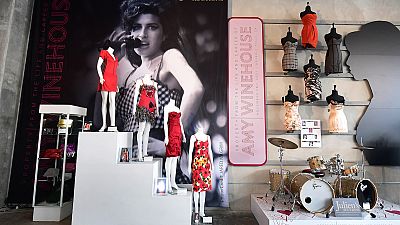 A collection of Amy Winehouse dresses and her drum set are displayed at Julien's Auctions in Beverly Hills, California.   -   Copyright  FREDERIC J. BROWN / AFP
By Euronews  with AP  •  Updated: 02/11/2021

Fans of the late singer Amy Winehouse will have the opportunity to bid on her personal belongings this week at Julien's Auctions in Los Angeles.

Winehouse, who died from the effects of alcohol poisoning in July 2011, aged 27, released just two albums, yet is considered a musical icon, praised for her jazz-like vocals and honest lyrics. She won five Grammys in 2008.

"We have amazing outfits worn from all her stage performances, events, red carpet events, charity events where you have her purses, her shoes, her handbags, her swimsuits. Everything representing an amazing life and career, including drum kits, guitars, road cases for when she was on tour," said Martin Nolan, executive director of Julien's Auctions.

Besides the dress she wore at her last performance, the other big ticket item is a heart-shaped purse designed by Moschino.

"She loved hearts. Any time Amy signed her name or was doodling, it was always hearts and you see hearts interspersed throughout this exhibition, representing who she was as a person who we all came to know and love," Nolan said.

Nolan said that "a generous portion" of the sale proceeds will go toward the Amy Winehouse Foundation, which helps people struggling with addictions, including providing recovery housing and music therapy.

While she is strongly associated with Camden Town, in northwest London - the singer lived in the area and was known to local residents - Nolan notes she is remembered around the globe.

"She is a global icon, a fashion icon, loved all over the world, and we have people registering to bid in this auction from everywhere," Nolan said. "Such a diverse, amazing voice, she gave us so much entertainment."

The exhibit of the late singer's belongings went on public display at Julien's Auctions on Monday. The items will be auctioned on the 6th and 7th November 2021.

Bidders can vie for items live at Julien's Auctions or online at Julienslive.com.

Gigs are back in Ireland - just don't expect to crowdsurf