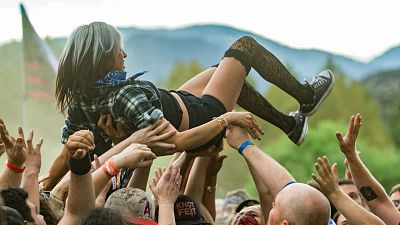 Performers and concert goers are being discouraged from 'high-risk activites' like crowdsurfing   -   Copyright  Paul A. Hebert/Invision/AP
By Shannon McDonagh  with Reuters  •  Updated: 29/10/2021

Irish nightlife has reopened for the first time since March 2020 and concerts are finally back at full capacity.

The country is set to welcome shows this month from from US rapper Snoop Dogg, avant-pop hero Rina Sawayama, and 90s RnB star Gabrielle, to name a few.

But under new guidance, crowd surfing will not be permitted and nightclub goers must form a socially distanced queue to buy drinks, in order to keep COVID numbers low.

"No crowdsurfing is allowed at gigs"

A real line from a very 2021 news story. https://t.co/MGQBTXfjEj

Ireland's pandemic regime has continued to be one of the toughest in Europe, with concert venues, museums, and galleries taking severe financial hits this year and last.

Ministers are scrambling to put some mitigation measures in place for cultural venues in order to minimise any further spread and keep the whole economy open.

The government has told performers they should not "partake in high-risk activities" such as crowd surfing, moving through the crowd or throwing personal items from the stage.

Neither should they encourage fans to sing along, the guidelines said.

This isn't the first time Ireland has cracked down on getting close at concerts - albeit for a different reason.

A Smashing Pumpkins show at Dublin's The Point in 1996 ended in catastrophe when moshing and crowdsurfing in the theatre grew so intense a 17-year-old girl suffered a fatal heart attack from being crushed.

Bernadette O'Brien found herself trapped in a pile-up at the barriers facing the stage.

The band - who were vocal critics of moshing at the time - cancelled a follow-up Belfast show in response. A Pearl Jam show later that year ended in riots, a suspected retaliation to the restrictions.

The Fugees were also banned from the venue for appearing to encourage said behaviour.

Warnings against moshing or crowdsurfing were printed on concert tickets for some time afterwards.

Nights out will also be less spontaneous, with anyone attending a nightclub required to buy a ticket online at least one hour in advance to assist with contact tracing, a measure club owners have been particularly critical of.

The measures, which include the continued requirement for vaccine certificates to gain entry to pubs, restaurants, nightclubs and indoor live entertainment venues, are likely to last until at least February, the government has said.