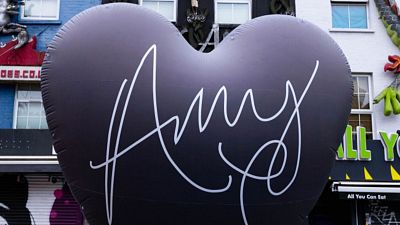 A 20-foot black heart has been erected in Camden to mark the 15th anniversary of the late Amy Winehouse's 'Back to Black' album.

The singer cemented herself as a global star in her short recording career, culminating in the seminal 2006 LP.

They represent the "love" that the singer - who died of alcohol poisoning in 2011, aged 27 - "poured into the making of 'Back to Black', and its emotional connection in the hearts of music fans across the world."

Another heart has been placed in front of Camden's Roundhouse venue with the lyric "You go back to her and I go back to black" emblazoned across it.

The venue would become the last place the soul performer was last seen publicly before her death - on stage with her goddaughter, Dionne Bromfield, at iTunes Festival.

Winehouse spent many years of her life living in Camden.

Fans are known to pilgrimage to 30 Camden Square, the place of her passing, to the extent that its local council had to ask people to stop stealing the road sign. The singer's favourite local pub, The Hawley Arms, unveiled a mural last summer ahead of the 10-year anniversary of her death.

In 2014, a bronze statue of Amy was unveiled in the heart of the area. It now stands outside Camden's Stables Market.

Music industry celebrates 'Back To Black'

What's more, Spotify UK has launched an enhanced album experience for 'Back to Black' - which marked the 'Tears Dry on Their Own' hitmaker's final album - with content provided by Amy's record label and her estate.

Fans can listen to the artists that Amy inspired talking about her influence and gain an insight into the music icon's creative process.

The landmark record - which won five Grammys, including Record of the Year - has sold more than 22 million copies worldwide.

Among the artists to pen touching testimonials is 24-year-old rocker YUNGBLUD, who said listening to the album gave him the "confidence to be undeniably myself".

"I remember the first time I heard 'Back to Black', it completely changed my whole thought process and my whole identity and gave me confidence to be undeniably myself."

R&B pop star Mahalia, 23, said: "She was always really special to me and someone I always looked up to and someone that I wanted to be just like."