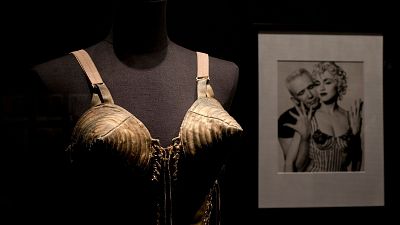 The pop hitmaker has kept all her iconic outfits from her lengthy career - but admitted anyone who wants to see her "archive" must wear the right protection to avoid any of the garments getting damaged.

She divulges in a Q&A from none other than Kim Kardashian - who is in the thick of her own fashion ventures - asking if she can borrow something from the collection.

In a teaser for the upcoming 'Madame X: Madame Xtra Q&A' documentary spin-off, Kardashian West asked: "Okay queen Madonna. Do you have all of your award show and music video wardrobe? And...can I wear something one day?"

From cone bras to Versace gowns

The 63-year-old singer was delighted with the question.

She responded: "That's so cute. I of course have a fashion archive. It's in Brooklyn. You have to wear rubber gloves to touch anything."

It's not unusual for musicians to take such care in preserving their outfits - Harry Styles reportedly stores his multicoloured suit collection in a giant refrigerator, and Beyoncé keeps the outfits from her Black Is King era in a safe.

With this came the revelation that the singer's eldest daughter, 25-year-old Lourdes Leon, takes a special interest in her 90s Versace pieces.

The singer enjoyed plentiful gowns and jewellery as a result of her sophisticated 1995 campaigns with the fashion label.

Madonna has worked with almost every designer label imaginable in her lengthy career.

Versace, Givenchy and Dolce & Gabbana have both been responsible for a number of her on-stage and red carpet looks, but it's Jean Paul Gaultier that holds her most enduring custom.

JPG's contributions to the Brooklyn archives contain the singer's conical bra, featured during the 1990s Blonde Ambition tour, the luxe red kimono donned at the 2000 Grammy Awards, and the controversial harness worn underneath an unconventionally large blazer during an event with the man himself.

Madonna's 'Madame X' documentary was released on MTV earlier this month and it will be followed-up with the 'Madame Xtra', likely to also be on the channel after its US airdate on November 18.

The 63-year-old previously admitted she felt uncomfortable at the idea of watching the documentary because she hates seeing herself on screen.

Back in 2019, she said: "I've seen bits and pieces from it [the initial documentary] I sort of gag when I watch it, cause I'm like, 'Oh my god, I can't.' It's hard to watch myself do anything. I can't even stand to watch myself in concert, like my last tour."

The 'Madame X' documentary details the 'Like a Virgin' singer's battles she had with hip and knee injuries, which forced her to cancel several of her concerts on her 75-date tour.

And the star previously suggested it might be too X-rated for some platforms and admitted she would be thrilled if it did end up on adult site OnlyFans.

She told fans on Instagram: “You should definitely have had that woman get her t*** out in 'Like A Prayer'.

“OnlyFans – do they have a format to show a whole show? All right, well that’s something to think about.

“It could make people feel a little bit uncomfortable because art is art, here to disturb the peace.”

Is King Charles III going to see the end of the Commonwealth?