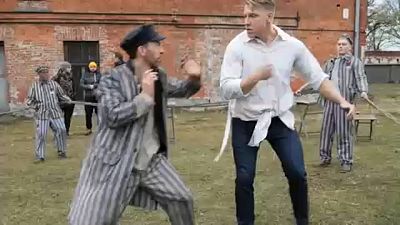 January 27, 2020 will mark the 75th anniversary of the liberation of Auschwitz -- the Nazi-operated concentration camp where more than a million people met their deaths during World War II. Now a new film tells the story of boxer Tadeusz Pietrzykowski, who survived the Holocaust thanks to his fists.

Born in Warsaw in 1917, Pietrzykowski was 20-years-old when he started competing as a bantamweight boxer.

When Germany invaded Poland in 1939, he tried to get to France but was arrested in Hungary and sent to Auschwitz. There he was forced to box to entertain the Nazi guards. His first fight in 1941 was against an opponent almost twice his weight. Pietrzykowski knocked him out, winning himself a loaf of bread.

"In order to survive the camp he had to prove himself in some way," Pietrzykowski's daughter, Eleonora Szafran, says. "He had just finished his high school exams and had no professional skills. The only thing he could do was box."

The role of Pietrykowski is played by Piotr Głowacki.

"The whole film is an attempt to answer who “Teddy” Pietrzykowski has become to me. This is certainly a story about an attempt to escape hell, about what a human is capable of, about recognising oneself."

The film's director, Maciej Barczewski, is the grandson of a former Auschwitz prisoner:

"It's a tale of courage, hope, and strength. First of all, it tells an unknown chapter of Polish history of an extraordinary man, who for his fellow inmates became a symbol of hope and the prospect that Poland has not yet become."

'Champion' (Mistrz in Polish) is scheduled for release in September 2020.

How colour pictures are bringing Auschwitz prisoners to life

How Copenhagen became the world's number one city for food