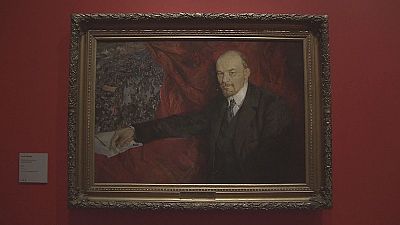 A momentous period in Russian history is on show in an exhibition at The Royal Academy in London.

The works of a variety of artists remember events 100 years ago and the Russian Revolution which dismantled the Tsarist autocracy and led to the eventual rise of the Soviet Union.

The exhibition ‘Revolution: Russian Art 1917 – 1932’ is a journey through that period captured by a variety of artists, photographers and sculptors of the time.

“This encapsulates a certain period in Russia that you just don’t get from textbooks. There’s nothing more powerful than the artist painting what’s going on in the world around him and the fact that artists are seen to be as powerful as soldiers, with their paintbrush using a visual type of propaganda, especially when most of the population were illiterate. It’s through the visual arts that a message is passed,” said Estelle Lovatt, art critic.

The exhibition explores the complex interaction between art and politics and how the state influenced artists.

It’s a unique look at Russian art from a period where new proletarian art for the Soviet state was encouraged until Stalin’s brutal crackdown and suppression in 1932.

It was a movement which was opposed by artists who were convinced art had to serve the revolution.

“There’s a group called the association of Russian revolutionary artists who were villianously determined to kill off the avant garde, insults, all kinds of fierce, ferocious criticism and they became more powerful as the 20’s went on and became a source of Socialist Realism.

‘And they argued very strongly that people needed to be able to understand the art, ordinary people, people on the bus needed to be able to know what on earth it was all about and they couldn’t do that with Popova or Kandinsky not surprisingly,” opined John Milner, Curator and Professor of Russian art history at the Courtauld Institute of Art.

Also woven through the galleries are original films, photographs and documents. The exhibition runs until mid April.