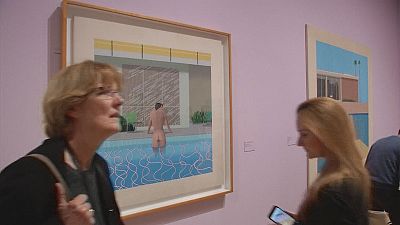 It is the fastest-selling exhibition in the history of Britain’s Tate Gallery. Over 20,000 advance tickets have been sold for the David Hockney retrospective.

The artist is an innovator whose 60-year career has taken in sketching, painting, printmaking, photography and digital iPad experiments.

His depictions of sun-dappled Los Angeles swimming pools and wooded Yorkshire hills are among the best-known images in contemporary art.

“The exhibition, it has a focus, an emphasis, which is on the way throughout his mature career Hockney has really interrogated what it is to make pictures, why make pictures, how do you capture the real world of time and movement in something flat and static,” said Chris Stephens, curator of the exhibition.

The works in the exhibition begin in 1960 when the artist had just arrived at London’s Royal College of Art and takes in ’50’s abstraction.

From then on it develops and features Hockney through different periods which explore how you engage with the world, how you describe the world in pictures while also sparking a debate about what art is.

“He just uses the canvas. He uses color, he uses the camera, he uses film in the most exceptional and unimaginable ways and he has this great imagination and this great power to put on 2D what is actually 3D and he confuses us and he plays with us and he cajoles with us,” opined Estelle Lovatt, art critic.

The 79-year-old who once said, “art has to move you and design does not, unless it’s a good design for a bus” still paints.

He has always documented the places and people around him, his pictures act almost as a diary for his life. The artist described revisiting his works for the retrospective as like encountering old friends.

The exhibition runs to May 29 after which it will move to the Pompidou Centre in Paris from the end of June to October. It goes across the Atlantic to New York’s Metropolitan Museum of Art from November to February.