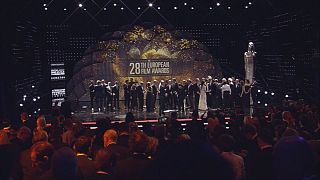 The great and the good of the European film industry flocked to Berlin for the 28th European Film Awards.

As well as a celebration of the continents varied cinematic talent there were calls for European unity in the face of economic unease and the rise of populist politics.

Film director Wim Wenders is the President of the EFA:
“Europe is under growing stress politics is looking to tear us apart. European cinema show how we can unite. That is the mission of European cinema.’‘

#EFA2015: #WimWenders "we must stand up and remember that nothing good has ever grown out out of fear" pic.twitter.com/CQglt2v1SU

Michael Caine received an Honorary Award and picked up the best actor prize for his role in Paolo Sorrentino’s comedy ‘Youth,’ Caine said being natural is the key to humour on film:
‘‘In cinema you mustn’t try to be funny you have to be very real because you have to be a real person who does something funny not a comedian who tries to be funny.’‘

For Michael Caine a good film is based on collaboration: ‘‘It’s is about team work and that’s what we were.. A wonderful team because every single actor in this film was fabulous.’‘

Charlotte Rampling received a lifetime achievement award and the best actress gong for ’45 Years’ she plays opposite Tom Courtnety
as a marriage falls apart.

A Pigeon Sat on a Branch Reflecting on Existence is my favourite nominated for #efa2015pic.twitter.com/LXJcYpNKxz

A Pigeon Sat On A Branch Reflecting On Existence is certainly an odd little curio. It really defies explanation pic.twitter.com/CbXF4xRwa0

“I am a happy man that I am a funny man. It’s worthwhile this prize. I got a Golden Lion in Venice. it shows another side of my work.”

MUSTANG comes to @cinefamily in #LA next Friday 12/18! https://t.co/nausrCndvm#MustangFilmpic.twitter.com/gh3y1nk9jf

The multi-award winning film follows five orphaned sisters as they grow up in a remote, conservative Turkish village.

Director Deniz Gamze Ergüven explained her motivation: ‘‘It is told like in the manner of a story, which then uses poetry to move away from reality, its an emotional response to a certain type of social reality.’‘

For double Oscar winner Christoph Waltz, it is diversity which is key to European cinema:

why christopher waltz looking like Logic after 30 years omg pic.twitter.com/euKjqfwK1z

Waltz was handed the prize for European Achievement in World Cinema.

Euronews arts correspondent Wolfgang Spindler reports from Berlin: “This years winners of the main awards belong to established talent of European cinema.
The younger generation of filmmakers and actors had to take a back seat while the European Film Awards went elsewhere.’‘

The #EFA2015 winners. What a beautiful celebration of European cinema. Congratulations! pic.twitter.com/isE7WANv8v