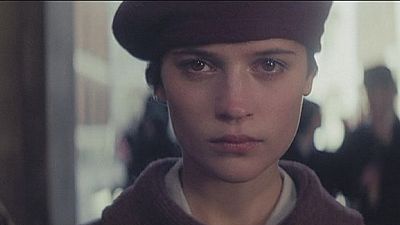 ‘==Testament of Youth' tells the story of Vera Brittain==. who postponed her studies at Oxford University during World War I to serve as a volunteer nurse in London, Malta and France. She later became a writer and a pacifist.

By the time she's deep in the war and what happens after the war we're right up close to her, psychologically in her head and the challenges that she now faces to move on.

The film stars Swedish actress Alicia Vikander as Vera and Kit Harington as her fiancé Roland.

“It was a very emotional shoot,” said Vikander. “It was quite extraordinary. I’ve been looking back and realised that we did about eight, nine scenes a day, which is a lot. And it’s a heavy piece. There were a lot of things that you need to… I wanted to (give) justice to this woman. And it is a lot of motional scenes.”

Although the film deals with the harrowing effects of war, it steers away from showing too many battle scenes – sticking instead with the stories of those left at home.

“I can’t think of many films, if any, where it’s so clearly about not so much the men at the front but the women left behind,” said Kit Harington. “That’s what Vera Brittain’s book helps us see more than anything else, is that side of the war.”

‘Testament of Youth’ is director James Kent’s first feature film. Best known for documentaries, Kent wanted the look of his film to be different to other war dramas.

“The idea is that they had this wonderful Edwardian summer before catastrophe struck,” he explained. “And what you’ll notice when you watch the film is that the lens gets tighter and tighter on Vera. So, by the time she’s deep in the war and what happens after the war we’re right up close to her, psychologically in her head and the challenges that she now faces to move on. “

‘Testament of Youth’ is out now in the UK and Ireland.