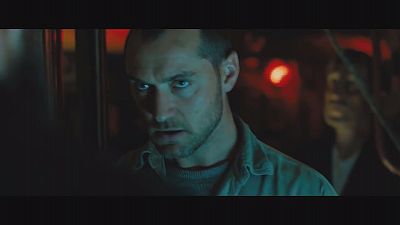 ‘Black Sea’ is a new suspense thriller by Academy Award-winning director Kevin Macdonald about a rag-tag crew of British and Russian sailors in search of Nazi gold in the Black Sea.

Jude Law stars as submarine captain Robinson, who heads the crew as they set off in a vintage Russian diesel submarine to retrieve the sunken treasure.

“I watched a lot of old sub movies and realised that one of the rules I wanted to stick to was the camera is never going to go outside the sub. Because, really, you lose all the claustrophobia if the camera is on a crane arm outside and you’re taken off outside of the set and the camera is floating around everywhere and you know that the camera is not in there, so we, the crew, we were all in there with the actors. I think you could sort of feel that,” says Macdonald.

Much of the filming was done on a genuine 1967 Foxtrot class submarine having belonged to the Russian Navy, known as the Black Widow, owned by a private collector in the UK.

“I think the biggest challenge of all in making it was quite simply the proximity, and sustaining drama and tension in tiny rooms. I think what we discovered – and maybe we’re not the first – is that the submarine movie is a genre in its own right and it works because, if something goes wrong in that environment, you’re dead,” says Jude Law.

Things don’t quite go according to plan and tensions soon flare between the men, exacerbated by greed and the cramped conditions inside the sub.

“It’s at that point that it gets a little less glorious, the challenge, once we got into the submarine,” says Australian actor Ben Mendelsohn, who plays one of the crew members.

Co-star Michael Smiley agrees: “Yeah, you realise that apparently when the Russians built these submarines they sort of forgot, ‘Oh yeah, people are going to sleep here, too,’ so they just threw up a couple of hammocks and that would be it, you know what I mean?”

The film has opened to mixed reviews with one critic calling it "contrived" and "implausible", while another praised its "chest-tightening tension and striking contemporary resonance".

‘Black Sea’ by Kevin Macdonald is on global release from now.