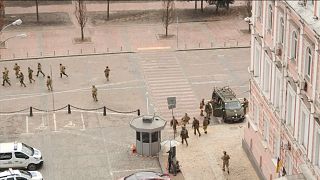 Ukraine military forces were seen on the streets near St. Michael's Golden-Domed Monastery in the capital on Friday as Russia pressed its invasion of to the outskirts of Kyiv.

Russia has unleashed airstrikes on cities and military bases and sent in troops and tanks from three sides in an attack that could rewrite the global post-Cold War security order.