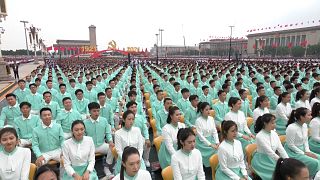 China marks 100 years of the CCP

Thousands of military personnel and other citizens attended the event.

Wearing a grey buttoned-up suit of the type worn by Mao Zedong, Xi spoke from the balcony of Tiananmen Gate, emphasizing the party's role in bringing China to global prominence and saying it would never be divided from the people.

Thursday's events are the climax of weeks of ceremonies and displays praising the role of the party in bringing vast improvements in the quality of life at home, and restoring China's economic, political and military influence abroad.

While the progress dates mainly from economic reforms enacted by Deng Xiaoping four decades ago, the celebrations spotlight the role of Xi, who has established himself as China's most powerful leader since Mao.