Following our first and second articles on key moments in the UK’s relationship with the European Union, this third and final report examines the effects of enlargement over the past decade as migrant workers from the ex-communist states flock to Britain, while the government’s tussles over the EU ultimately lead to the forthcoming ‘Brexit’ referendum on Britain’s EU membership.

The United Kingdom under Prime Minister Tony Blair has controversially gone to war against Iraq the previous year, in support of the US Bush administration – but the move provokes a serious rift with European allies, especially France and Germany which are opposed to the invasion. In contrast, Blair has been a key proponent of the EU’s biggest expansion plan which sees 10 new states join the EU in 2004, eight of them former communist states which have become free-market democracies since the end of the Cold War. The consequences of the move will have a direct bearing on today’s referendum.

Despite the EU’s founding principle of the free movement of workers, fears over mass migration mean the 2004 accession agreements allow EU member states to impose temporary restrictions on the immigration of citizens from most of the new countries. All pre-2004 member states duly restrict access to their labour markets – apart from Ireland, Sweden and… Britain, which welcomes new workers to service economic growth. Ironically – in the light of the arguments raging over “uncontrolled immigration” in the UK a decade later – the fears at this stage seem to be more strongly felt in countries like France, where the spectre of the “Polish plumber” is touted as a symbol of cheap labour from central Europe threatening French jobs.

Immigration into the UK is however a sensitive issue. In the preceding years thousands of migrants from the Balkans and beyond have freely crossed the new border-free Europe aiming to reach England, many ending up in a Red Cross camp at Sangatte on the northern French coast which to many becomes a visual illustration of Britain’s illegal immigration problem.

Over the next few years the swelling numbers of legal migrants from the EU’s new nations fuel the debate. Early government estimates predicting that the number initially arriving will be in the low tens of thousands prove to be wildly inaccurate: the actual figure turns out to be twenty times higher. The number is partially offset by Britons moving overseas, the new arrivals undoubtedly boost the economy, other EU countries have more migrants per head, and many Poles and other European nationals who come to the UK head home in due course. But migrants are seen as adding to pressure on jobs and pay, housing, schools and health services – in some quarters as altering the nation’s identity – and above all, the idea of a country unable to control its own borders takes hold.

The two political parties at the forefront of events leading to this year’s referendum both have new leaders who are to play pivotal roles over the next decade. David Cameron has won the opposition Conservatives’ leadership election the previous year. In September 2006 Nigel Farage becomes leader of the United Kingdom Independence Party (UKIP), whose members Cameron has described in a radio interview as “a bunch of fruitcakes, loonies and closet racists, mostly” – prompting a predictable protest from the party concerned. 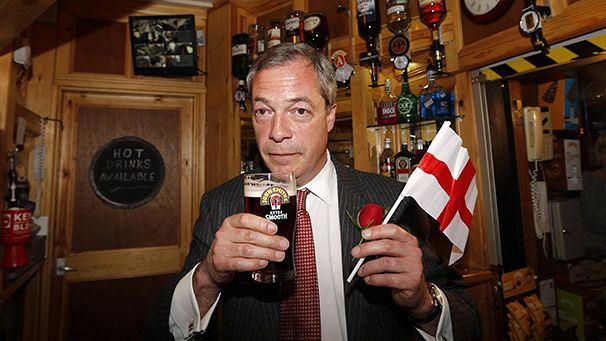 UKIP has one overriding goal: to take the UK out of the EU. Farage has been a member of the European Parliament since 1999; under him the “fruitcakes” refuse to lie down, and instead go on not only to challenge the political mainstream, but to become part of it – while casting themselves as vehemently anti-establishment. Broadening its appeal from a “one issue” fringe party, it goes on to achieve notable electoral success. UKIP progresses to win the highest share of the domestic vote, and number of seats, in the 2014 European Parliament elections. At home it suffers in general elections, but steadily-increasing scores in Westminster by-elections culminate in the election of its first MPs in 2014.

UKIP’s success under Farage, steadily draining Eurosceptic voters from the Conservatives’ ranks, has a major influence on the eventual decision to hold a referendum on the UK’s EU membership.

Bubbling away in the background, several events have been contributing to the European Union’s development which – despite the odd setback – are seen by Britain’s growing army of Eurosceptics as further eroding national sovereignty. A new proposed constitution for the EU has been rejected by French and Dutch voters at referendums in 2005. It is replaced by the Lisbon Treaty, which in turn is rejected by Irish voters in 2008 before being backed in a second Irish referendum the following year.

The Lisbon Treaty comes into force in December 2009. Unlike the ill-fated constitution whose objective was to replace previous EU treaties, Lisbon simply amends them but is largely seen as preserving the essence of the constitution. The overall aim has been described as an attempt to modernise the EU and enhance the role of its citizens, by streamlining the organisation and making it more democratic. The EU’s critics argue it is becoming more federalist.

The UK, which has already opted out of the euro and the EU’s border-free Schengen Area, now secures guarantees against the Charter of Fundamental Human Rights, and more flexibility over justice and home affairs where it is granted the power to opt back in to measures having opted out… all of which leads to resentment in some quarters that Britain should be able to “pick and choose” from a Europe à la carte.

Tony Blair has left Downing Street voluntarily in 2007, insisting that the EU is ‘absolutely central to Britain’s future’, and claiming that “people do understand the importance of Britain being in Europe to a greater degree today”. He is replaced by Gordon Brown, the man who has kept the UK out of the euro, but who tries to reinforce the country’s influence at the top table in Brussels by ensuring Britain’s presence at eurozone summits.

The UK’s 2010 general election brings the first coalition government since World War II under David Cameron as prime minister. Although six years later he spearheads the campaign to keep the UK in the EU, in the meantime he is said to have overseen the biggest shift in Britain’s European policy since it joined the EU – taking the country in a distinctly Eurosceptic direction.

In 2009 Cameron has fulfilled a pledge to take Conservative MEPs out of the European Parliament’s main centre-right group, the European People’s Party (EPP), instead forming a new Eurosceptic, anti-federalist alliance which within five years grows to become the Parliament’s third largest group. The move is later said to have dented Cameron’s clout with the likes of Germany’s Chancellor Angela Merkel.

In power at home, the new Conservative-led government immediately flexes the muscles of Britain’s national sovereignty. The UK pulls out of eurozone summits, arguing that “closer EU integration is for the eurozone only”. The UK Parliament passes the 2011 European Union Act to keep EU supremacy at bay: in future referendums will be required for any significant transfer of power.

The “bad old days” of UK-EU rows return in December with a bust-up at a summit to tackle the euro crisis. Unable to secure Franco-German agreement on safeguards for the City of London, and faced with a certain Tory rebellion at home should he agree, Cameron blocks proposals for a new EU treaty on fiscal regulation, leaving Britain isolated. The event is portrayed as a major showdown between the UK and the EU but other countries vow to press on with the measures outside the treaty framework.

Years earlier, the UK had welcomed new central and eastern European EU members as potential allies: they were economically liberal, antlanticist, wary of EU federalism. Yet on the major issues London has failed to carry them with it. Pressure now begins to build over Britain’s EU membership itself.

The prime minister uses a speech at Bloomberg in January to call for a new settlement for Britain in a reformed European Union which the Conservatives will re-negotiate should they win the next election – and pledges to hold a referendum on the UK’s membership.

Opinion polls at the time suggest public support for the anti-EU UK Independence Party stands at 10 percent. The European Union has just welcomed its 28th member: Croatia. The following year sees the end of work restrictions on migrants from Bulgaria and Romania, which had joined the EU in 2007. Net migration into the UK from the rest of the EU is estimated at 123,000 in 2013, rising to 178,000 in 2014 – although the number of migrants arriving from outside the EU remains consistently higher .

Cameron survives one referendum: Scotland votes to remain in the UK. The Tories duly go on to win a surprise outright victory at the 2015 general election.

EU leaders strike a deal in February on the revised terms of Britain’s membership. The UK secures a commitment to exempt Britain from “ever closer union” (a stated EU goal that has long sent shudders down Eurosceptic spines), limits to migrant benefits, guarantees for EU countries outside the eurozone, and a pledge to increase competitiveness and cut red tape.

It has earlier been made clear to Britain that the principle of free movement between countries will not be compromised. Many Eurosceptics are unimpressed with the deal and the Conservatives remain divided.

The accord enables Cameron to announce the referendum for June 23, and call for people to back Britain’s continued EU membership.

I have negotiated a deal to give the UK special status in the EU. I will be recommending it to Cabinet tomorrow. Press conference shortly.