In the first of a series of three articles, Euronews examines key moments in Britain’s at-times tortured relationship with the European Union – from its accession in 1973 to the events leading up to the imminent referendum on Britain’s membership.

The UK joins the European Economic Community on January 1, along with Denmark and Ireland, raising the number of EEC member states to nine. The deal struck by a Conservative government follows years of negotiations involving Edward Heath both before and after he becomes prime minister.

At the time the UK is one of the poorest major European nations, its economy having slipped behind the likes of France, Germany and Italy. Conscious of declining trade links with the Commonwealth and wary of being marginalised by a fast-emerging economic powerhouse on the continent, Britain has twice attempted to join the EEC in the 1960s. Each time it has been thwarted by President de Gaulle of France, who fears Europe being ‘drowned in the Atlantic’ by Britain’s US ties, and diluted by its ‘great escort’ of Commonwealth countries. The French veto is finally lifted by de Gaulle’s successor, Georges Pompidou.

British officials have been aware since the fledgling EEC’s origins in the late 1950s that joining the new entity will involve some loss of sovereignty. Commenting on the impact of European law in a 1974 judgement, senior English judge Lord Denning says “when we come to matters with a European element, the Treaty (of Rome) is like an incoming tide. It flows into the estuaries and up the rivers. It cannot be held back”.

Later, an ever-growing chorus of eurosceptics will complain that given the EU’s increasingly federalist drift, British sovereignty has been sold down the river. 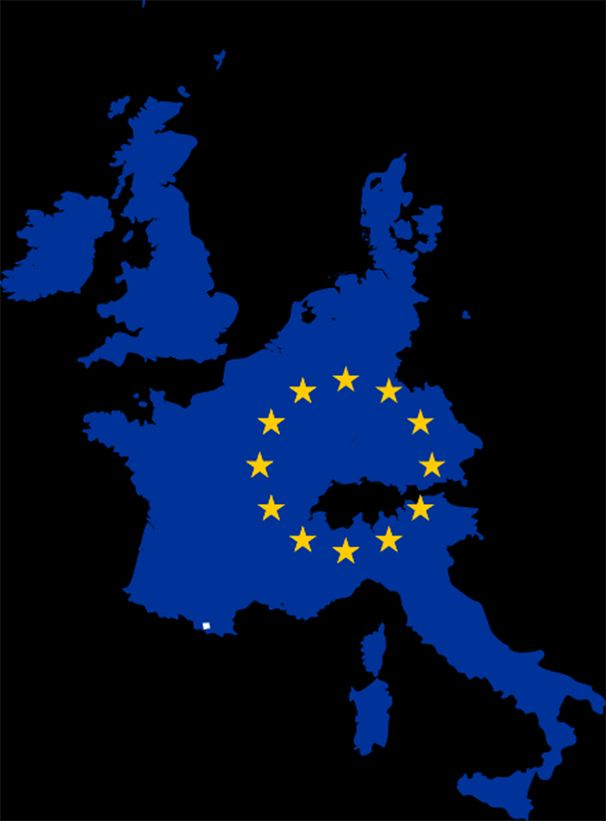 Elections the previous year have returned to power a Labour government deeply divided over the UK’s EEC membership. Under Prime Minister Harold Wilson terms are renegotiated and – just two and a half years after the UK joined – a referendum is held in early June 1975 on whether Britain should remain part of the ‘Common Market’.

Labour ministers campaign on both sides – with pro-Marketeers pitted against ‘No’ campaigners railing against ‘Eurocapitalism’. But other mainstream politicians – including the new opposition leader Margaret Thatcher – as well as business and the press, are overwhelmingly in favour of staying in.

Eurosceptics have since claimed that the supremacy of European over national law was covered up at the time. In fact, although it is certainly underplayed by the pro-EEC camp, the question of sovereignty is raised during the campaign. However, weighing far more heavily in the public’s minds are arguments about jobs and prices – a sensitive issue in the inflation-ridden 1970s.

With a high turnout at the polls, Britain duly votes by two-to-one to remain part of the European club.

I really want the famous #Thatcher jumper – I even promise to wear it in public on my birthday! #Paxman#EUrefpic.twitter.com/Zx43i3f56d

Thatcher is definitely no longer wearing her multi-flag jumper as she thumps the table at the Fontainebleau summit threatening to withhold UK contributions to the European budget if a fairer deal is not granted.

Having had no say in the EEC’s original development, and limited clout when negotiating its entry terms, London has long since argued that the Common Agricultural Policy – representing 70 percent of EEC spending particularly beneficial to French farmers – and the mechanism for determining budget contributions, are both unfavourable to the UK.

“We are simply asking to have our own money back,” Thatcher says, persisting at the summit amid a reportedly male chauvinistic atmosphere which sees other leaders pretend to be asleep or read newspapers while she makes her case.

Although the prime minister tries to hold out for more, the resulting agreement grants Britain a 66 percent rebate on its net contributions which remains in place over three decades later. It is seen as a symbolic victory for the UK – and a landmark battle setting the tone for Britain’s relationship with Europe for years to come.

Margaret Thatcher is a fervent supporter as the Single European Act is signed to banish trade barriers within the European Community, paving the way for a full single internal market by 1992 to counter the economic clout of the USA, Japan, and the growing Asian markets. The business-friendly UK embraces a move it believes will be good for economic growth – though it has to accept institutional reform involving the introduction of majority voting, scrapping several national vetoes, despite fears that this will erode national sovereignty.

According to her foreign policy adviser Charles Powell, Thatcher grasps the Single Market as a way to engage positively with the EC after the budget rows. However the negative strain of those long drawn-out negotiations takes its toll, contributing to alter her view of Europe over time from positive and favourable, to decidedly sceptical.

Long after leaving office, by the early 2000s Thatcher’s support for the Single European Act has evaporated as she says signing up to it was a terrible error.

The British prime minister’s speech to the College of Europe in Bruges in September is a watershed moment in the UK’s relationship with the European Community. It is remembered for one infamous Thatcher quotation: “We have not successfully rolled back the frontiers of the state in Britain, only to see them re-imposed at a European level, with a European super-state exercising a new dominance from Brussels”.

The speech becomes a benchmark for growing euroscepticism in Britain throughout the 1990s and 2000s, leading to the rise of UKIP and ultimately the current referendum on the UK’s EU membership.

The trigger for Bruges is the federalist drive of European Commission President Jacques Delors, who in recent speeches to the European Parliament and Britain’s Trades Union Congress (TUC) has spoken of a new Europe where 80 percent of economic and social policy will be decided at European not national level. Alarmed at the prospect of what she sees as Brussels-imposed socialism, Thatcher replies with her alternative vision for Europe.

But can her speech be seen as an early prototype for Brexit? According to Powell it was not meant to be anti-EU, and another far-less quoted excerpt from her speech could almost be lifted from today’s ‘Remain’ manifesto: “Let me be quite clear: Britain does not dream of some cosy, isolated existence on the fringes of the European Community. Our destiny is in Europe, as part of the Community”.

In contrast to growing hostility to Delors’ EC among British Conservatives, the traditionally eurosceptic Labour Party has found a figure and a project to rally round. 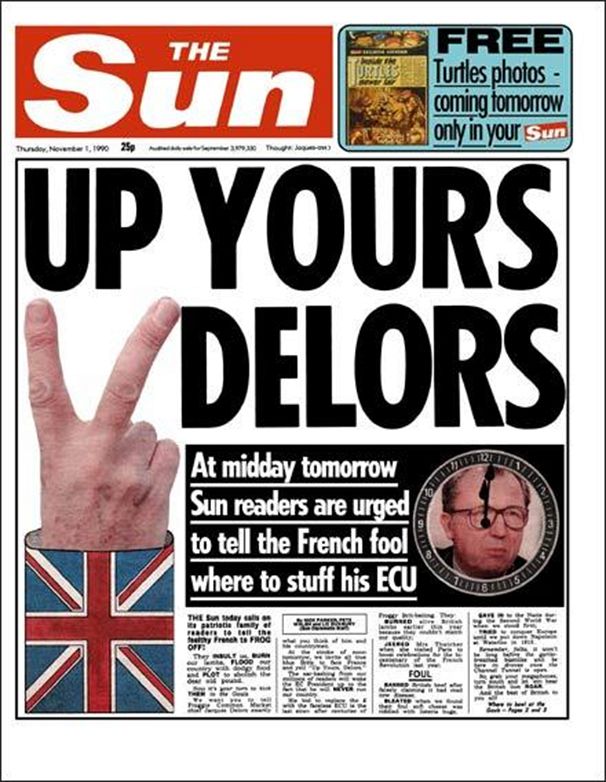 Delors’ federalist scheme has been gaining steam. The Commission President’s ideas for further European integration involve a Community with supranational power invested in the European Parliament, Commission and Council of Ministers. “No! No! No!” Thatcher famously tells the House of Commons on 30 October.

Two days later, in its own unique style The Sun echoes her hostility towards ‘the froggie Common Market chief’, urging the tabloid’s readers to “tell the French fool where to stuff his ECU” – the precursor to the euro.

However the government is anything but united on the issue. On the same day, Thatcher’s long-serving and – until then – faithful senior minister Geoffrey Howe resigns in protest at her European policy, precipitating her downfall within the month. The divisions unleashed in the Conservative Party over Europe persist to this day.

Meanwhile, Lord Denning has changed his tune, lamenting in 1990: “No longer is European law an incoming tide flowing up the estuaries of England. It is now like a tidal wave bringing down our sea walls and flowing inland over our fields and houses – to the dismay of all”.

“Up Yours Delors” is still cited as a benchmark for all subsequent eurosceptic stories by a British press whose treatment of Europe has been cited as one of the main reasons for the British people’s hostility towards the EU.

In the next article on the UK’s relationship with the EU, we look at the 1990s amid growing euroscepticism as the EU’s federal project gains momentum, and as Britain wrangles over whether or not to join the forthcoming single currency.