Russia has moved to ban all commercial vehicles registered in Ukraine from entering Russian territory.

It’s the latest move in a tit-for-tat dispute that has seen both countries restrict the movement of lorries from their neighbours.

The blanket suspension is an extension of action already taken: on Monday said it had stopped 152 Ukrainian trucks from heading towards Kazakhstan.

That move prompted Ukraine to suspend Russian cargo trucks from entering the country.

The dispute ignited at the weekend when Ukrainian activists, mostly from the far-right group Right Sector, blocked Russian trucks which had just crossed from Belarus.

They told the drivers they could walk home, but impounded their trucks at the border hoping to exchange them later for Ukrainian prisoners in the separatist-controlled east.

A separate row with Poland has obliged Russian lorries to take a tortuous route via Lithuania to reach Europe. Many have had to wait for hours at the border and again at Klaipeda, on Lithuania’s Baltic Coast, to take a ferry. 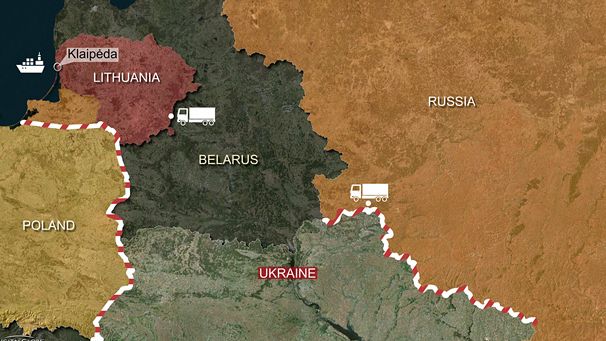 Hundreds of Russian lorries became stuck at three border points between Belarus and Lithuania – the last alternative route for Russian goods to the EU after Moscow and Warsaw failed to agree on transit rules.

The images showing stranded Russian lorries have now prompted Moscow to up the ante regarding Ukraine.

Many Ukrainian trucks carry goods to Kazakhstan. Russia says they will now be taken by vehicles from other countries.

On Tuesday afternoon Russian and Ukrainian authorities were reported to have reached agreement to partially suspend the restrictions until February 25, to allow lorries stranded in each other’s countries to return home. But the bans on new traffic remain in place.