The more things change, the more they stay the same… So goes the phrase penned by French critic Jean-Baptiste Alphonse Karr. The world has seen many changes over the past three decades sparked by technology, but in some social and political affairs only names and faces appear to have changed. Here’s a selection of what was news in 1985 and what people are talking about now.

1985Two Afghan guerillas line up an 82mm recoiless rifle for their daily round of firing at a Soviet security post along the main highway west of Kandahar.2015Afghan National Army soldiers fire artillery during a battle with Taliban insurgents in Kunduz.

1985Hundreds of Afghan refugees flee through the streets of Islamabad after Pakistani police broke up a protest near the Soviet Embassy in Islamabad, Pakistan.2015An Afghan migrant jumps off an overcrowded raft onto a beach at the Greek island of Lesbos.

1985A Chevrolet car is parked in a street of Old Havana, Cuba2015Retiree Lance Veit ©, 65, from California, enjoys a ride in a vintage car at the seafront Malecon during a cultural exchange trip in Havana, July 11, 2015. The United States and Cuba formally agreed to restore diplomatic relations as of July 20

1985Issam Abdel Satter, 24, carries a Kalashnikov rifle in this photograph taken before he killed himself in a suicide car bomb attack on a pro-Israeli militia in South Lebanon.2015Lebanese Army soldiers inspect a cafe where a suicide bomb attack took place in Jabal Mohsen, Tripoli.

1985Pope John Paul II reaches out to touch the hands of Venezuelans who came to see him in Caracas2015Pope Francis waves to the faithful while riding on a popemobile in El Quinche, Ecuador

1985Mikhail Gorbachev ©, General Secretary of CPSU CC seen shaking hands with the Chairman of the Revolutionary Council of Afghanistan2015Russian President Vladimir Putin and former Afghan President Hamid Karzai at the Kremlin in Moscow.

1985Former tennis star Bjorn Borg sits with girlfriend Janike at the launch of the “Bjorn Borg Menswear Collection” in Paris2015Former England captain David Beckham with his daughter, Harper, on his lap and son Brooklyn during a presentation of the Victoria Beckham Fall/Winter 2015 collection during New York Fashion Week 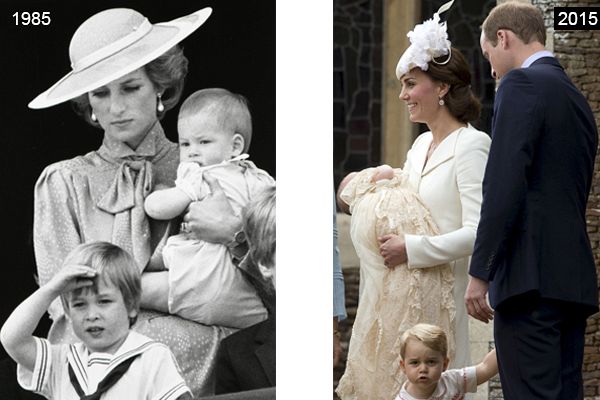 And finally, Doc and Marty McFly, then and now.
Euronews is no longer accessible on Internet Explorer. This browser is not updated by Microsoft and does not support the last technical evolutions. We encourage you to use another browser, such as Edge, Safari, Google Chrome or Mozilla Firefox.