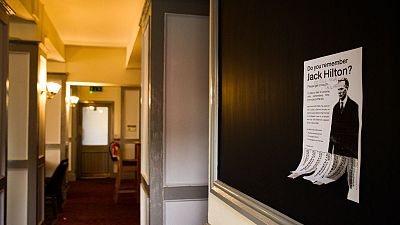 They say the art of letter writing is dead, but for 28-year-old bartender / writer Jack Chadwick, it has come in extremely useful.

Earlier this year, he penned a note to Mary Hassall, a long-time friend of someone very important to Chadwick: Jack Hilton.

Never heard of him? Join the club.

Hilton was the favourite author of illustrious names like W. H. Auden and George Orwell. But unlike these famous names, Hilton’s was lost to history.

Through a painstaking investigation, Chadwick tracked down Hassall’s home address, as she represented his last hope of unearthing the truth.

“She was moving house at the time,” Chadwick told Euronews Culture.

“If I’d been a week later, my letter would have gone through the door to the bottom of a pile of takeaway leaflets.”

It was one of many serendipitous twists in an analogue tale of tenacity and human connection that bred real results.

Who was Jack Hilton?

Chadwick’s journey began last summer in the Working Class Movement Library, located in the streets of Salford in the north of England.

“I came across this weird, crumbling, ancient book with this strange cover of a skeleton kneeling with its arms outstretched,” says Chadwick.

Fascinated by the out-of-place nature of the book in a library which is predominantly filled with information on the labour movement and trade union meeting minutes, Chadwick opened the book.

“I was blown away by what I read," he recalls.

Opening with quotes from Shakespeare’s ‘The Tempest', the novel was ‘Caliban Shrieks’, which details the early life of Jack Hilton, from a childhood in the industrial heartlands of Northern England to his participation in the First World War.

Through Hilton, the reader experiences a first-person interrogation of a childhood characterised by infant-mortality and child-labour.

Hilton and his siblings all went to work in the Mills Greater Manchester aged 11, and only one of his sisters lived past 30. The book goes on to describe his peer-pressured enlistment in WWI, the Battle of the Somme, and returning to the UK to process his trauma as a wandering vagrant.

“The thread that links all these stories in a way is that you see how his beliefs and views of the world are shaped, in a really material way, by what’s going on in his life,” says Chadwick.

“Certain ideas he’s been given in his life are dispelled by his own experience and ability to make his own sense of things.”

After making enquiries to the now-retired librarian, Chadwick discovered that the author was a mysterious figure. Active between 1934 and 1950 before disappearing into obscurity, nobody seemed to know much about him.

“That the book was by an author that no one had heard of just grabbed me,” says Chadwick.

“He was a lost legend, an author who’d come out of nowhere, done some amazing things and then for reasons unknown had just quietly disappeared and gone into the background.”

Internet searches yielded little in the way of information, with an incorrect news report that Hilton died in Pewsey. This sent Chadwick down the wrong rabbit hole.

In between shifts tending bar in a local nightclub, Chadwick combed government records and sent off for death certificates. He managed to uncover the correct place and time of Hilton’s death as well as find his will, but beyond these elements, it was here that Chadwick’s literary sleuthing hit a dead end.

“I knew where and when he’d died but I was at that point where I thought: ‘This is it, it's the end of the road’.”

Whereas most people would have thrown in the towel, Chadwick grasped onto one last gambit. After mocking up and printing out flyers one Sunday, he got the bus from his home in the suburbs ofManchester to the place where Hilton had died in 1983; Chadderton near the borders of Yorkshire.

He began leafleting pubs in the area in the hopes of catching the attention of Hilton’s erstwhile friends and relatives. It didn’t take long.

“I was having a pint and before I’d even finished, the people who were running the bar had found one of the regulars who was able to tell me the following names: Bill and Brian Hassall.”

Armed with this information, Chadwick was able to locate the address of Brian’s widow, Mary, who owned the copyright to Hilton’s work.

“She was chuffed to hear from me,” says Chadwick.

Hassall and her husband had known Jack Hilton, who by all accounts was something of a character. She had many fond memories of the author entertaining her children by blowing smoke through his perforated eardrums, a souvenir from his time working around deafening machines as a child.

“Brian was with Jack when he died in hospital,” says Chadwick. “He was almost like a son because Jack never had any children.”

Chadwick returned to the Working Class Movement Library and diligently made a copy of ‘Caliban Shrieks’, which he then bound for Hassall.

“She was really moved by that and welled-up a little bit,” says Chadwick.

“It sparked a lot of memories and thoughts for her.”

Since printing out the book for Mary Hassall, Chadwick has met with her once a month, a fitting example of the human connection at the heart of his detective story.

In the meantime, the dedicated sleuth has received a slew of offers from publishers for ‘Caliban Shrieks’ after Mary gave him the copyright. She also gifted him the copyright to the rest of Hilton’s back catalogue, which includes travelogues he wrote when he walked across the Pennines, from Chadderton to Hexham in the Northeast of England.

Chadwick spoke to Euronews Culture on the eve of a trip to Nottingham, a city in the East Midlands, to look at more archival material. He joked he was planning to put right the incorrect Wikipedia page which had led him astray in the beginning.

The story of Hilton - lost due to the lack of establishment credentials that his fans Auden and Orwell enjoyed - is one which is rooted in the industrial heartlands of the UK, but could also be repeated the world over.

Chadwick is full of praise for the Working Class Movement Library in Greater Manchester which started his search, and laments that there are not more resources for other would-be investigators like himself.

He also takes care to highlight that, if we think outside the internet box, we might be able to unearth more than we think.

“The internet is very limited in terms of the ability to reach people in certain respects,” he says. “I cut a lot of time out by just going to the places where the story happened, and talking to people.

But one question remains at the forefront of his mind.

"How many more fantastic creators like Hilton are not being picked up now because of the lack of resources? People who have done so much to justify a place in literature or art but who, as outsiders, have been lost.”

If you want to support Jack Chadwick’s Jack Hilton investigation, you can donate here.

Ink and Blood: How has Ukrainian Literature changed since 2014?