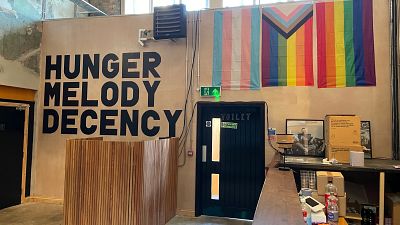 The finalists bidding to be crowned UK City of Culture 2025 have now been confirmed.

One of Bradford, County Durham, Southampton or Wrexham County will have a year-long celebration of its cultural activities with millions of pounds pumped into its economy. The government’s quadrennial scheme to lead cultural regeneration is fantastic for the cities which get to hold the title… but what’ll happen to the three runners-up?

“The bid was an excuse for people to look at all of the brilliant things the city had, and armed with that knowledge, it really energised people,” says Rebecca Ball, chief executive of Sunderland Culture and part of the team behind the north-eastern city’s unsuccessful bid for the 2021 title.

“We could see things we hadn’t previously noticed before about the city. There was a really strong momentum that had built up around the bid and we knew right from the moment we were shortlisted that we had something really powerful, regardless of what happened.”

2021 proved a tricky year for big social events as the pandemic raged on, so perhaps the disappointment of missing out could be mitigated.

“Coventry [the winning city] made an amazing job of what was an incredibly difficult situation,” Ball tells Euronews. “Our bid was all about connecting people who don’t otherwise connect, which would have been made very tough by COVID.

“It would have been amazing if we’d won – that injection of resource and enhancement of our profile – and I’d never sit here and say that wouldn’t have been a wonderful thing. But at the same time, even without that, we’ve achieved some really positive step changes.”

One of those step changes is the increasing number of hugely inclusive spaces in the city, and there’s none more welcoming example than Pop Recs, a café and gig venue originally founded by members of local band Frankie & The Heartstrings. Over to guitarist Michael McKnight.

“For our second album we thought it would be cool and a bit of a novelty to open up a pop-up record shop for a couple of weeks in Sunderland,” he recalls. “We’d all come in every day. We got a coffee machine in, put a few free gigs on, and the shop proved more popular than the album. People egged us on to keep the record shop on rather than the band! So we did. Unfortunately for them we kept the band going for a little bit as well!”

"Nice things in culture shouldn’t be hard to access”

The shop occupied other locations in the city before – as part of the City of Culture plan – nudging itself outside of Sunderland’s main shopping district, the racks of records now a distant memory with coffee, cake and so much more replacing them.

“Sunderland council asked us if we’d be interested in moving into new building which is where we are sat now,” says Michael. “We’re a bit out of town towards the east end of Sunderland, which I’m sure no one would mind us saying is like the Wild West. The idea was not only that we’d regenerate one of what’s not only Sunderland’s roughest bits, but actually its most beautiful and its oldest. We’re sat in an old department store built in 1804 that at one time was where the middle class would have come and spent their disposable income.

“Five years of love and restoration have made it a place people can bring their kids to an art group, their nana to a knitting group, come see a punk rock band, come for a coffee, come for a sandwich – the mental health charity Mind have a room here so you can come have some counselling, too. We have poetry groups, we have book groups, we have all kinds going on. Pop Recs means something different to everyone who comes. Nice things in culture shouldn’t be hard to access.”

That’s very much the mantra, with the venue’s Pride flags and gender-neutral toilets being something that might have caused a stir in this city not too long ago. “We just want to make sure absolutely everyone who comes through the door feels super welcome. Everyone’s been amazing about it. I think Sunderland is probably playing catch up with metropolitan places on that level, but I think we’re getting there. It’s going through a bit of a renaissance, to be honest. It was once a really grand town and it’s slowly getting back to that again. It’ll be unrecognisable in ten years’ time.”

While the bid helped get Pop Recs into its new venue, Michael is just as keen as Rebecca to state how missing out on City of Culture status hasn’t been disastrous. Quite the opposite, in fact.

“Sunderland’s still doing what it said it would, it’s just out on its own rather than having that input from the bid. The bid gave people a bit of belief and opened their eyes to ‘woah, Sunderland is cool’. I really think it is. I’ve been lucky enough to travel to other places in the world and I know it’s a really great place to live. Anyone who doesn’t agree doesn’t have to stay!”

His is a number of burgeoning venues that combine the simple art of getting a coffee with a welcome dose of arts and culture. “If any of us are struggling for staff or short of coffee, we have no problem in turning to each other. We’re all mates and when we have events we’ll hang out together. And we’re all doing really well – the people who are doing well in Sunderland are the people who are doing things right. The people who seem to struggle are the ones who undervalue the city.”

Someone who certainly didn’t undervalue Sunderland was Dave Harper, Michael’s former bandmate and a man who helped bring the Pop Recs legend to life. He sadly passed away in 2021, meaning didn’t see the latest iteration of the venue finally completed. His face adorns almost every wall, of course.

“I’d love to see what the world was like with him still around,” says Michael. “It was a real Sliding Doors moment for the people in this city when Dave died; he changed a lot of lives. He was cool. Dave would just do anything for anyone, it didn’t matter who you were.

“It would be great if I could show him what he meant to us. He was always on Twitter and he ended up trending the day he died. That was his aim in life! To say something funny that would go viral. If he could see that Echo & The Bunnymen, The Charlatans and Franz Ferdinand were tweeting about him, he would have loved that. Who wouldn’t?”

With the vibrant, welcoming hub of Pop Recs, both he and Sunderland’s cultural ambition live on.