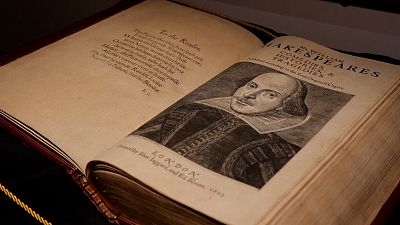 One of the surviving copies of Shakespeare's First Folio, the first published collection of his plays, is about to be auctioned at Sotheby's.

The collection of 36 plays by William Shakespeare was published in 1623, seven years after the author's death, and without it, some of his most famous works would have been lost.

Out of the 750 copies, less than a third are still accounted for, and less than 20 are privately owned, according to Sotheby's.

And beyond the fame of the plays that the folio contains, this first edition is the only official record of 18 Shakespeare works.

"Shakespeare First Folio is without question, the most important publication in the history of English literature. Without this book, no Macbeth, no Twelfth Night, no Winter's Tale. About half of Shakespeare's plays were first published in this volume," says Gabriel Heaton, Specialist and director of the books departments, Sotheby's.

The history of the book

The book, currently on display at Sotheby's in London until 15 June, will be auctioned next month and is estimated to fetch up to $2.5 million (€2.35m).

This copy in particular has an interesting history.

"It seems to have been in Scotland from the 17th century, certainly until the late 19th, early 20th century. It is in beautiful condition internally. Like most copies, it's missing some leaves. It's missing the famous portrait, for example. Very often, these were taken out and framed up as portraits early on in the book's history, or else as it is right at the beginning of the volume, it's the thing which gets damaged first," says Heaton.

According to Sotheby's, the book was first bought in the early 17th century by the Gordon family of Scotland and then passed into the hands of William Stuart Stirling Crawfurd (1819–1883), a socialite racehorse breeder, and political activist R. W. Seton-Watson (1879-1951) who encouraged fall of the Austro-Hungarian empire and supported the emergence of Czechoslovakia and Yugoslavia.

Missing pages were replaced with facsimiles, annotations were made - and drinks spilt, leaving some stains.

Because it was printed by hand, some letters are misaligned, some spaces are missing, and page numbers are sometimes wrong.

"The book that is naturally and most often compared to this is the King James Bible, because like Shakespeare, it is a book which entered the language. And there are so many phrases that we take for granted which actually originated in that translation of the Bible. And that's a book that was printed only a few years before," says Heaton.