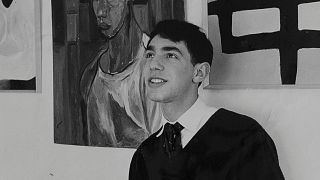 In 1992 Manchester Art Gallery (MAG) commissioned a piece by the artist Derek Jarman.

The painting, a blood-red canvas with the word “Queer” scrawled the shape of a heart, has been on display at the gallery ever since.

Whilst “Queer” was created against a backdrop of press vitriol and the AIDS epidemic, the work also came at a time when the city’s now-famous gay village was first under-development and protests had been held against the homophobic government policy, section 28.

“He could see those shoots,” says art and design curator at MAG, Fiona Corridan.

“He felt very proud when he saw the ‘Queer’ banner outside the gallery.

“It was a proud moment for him,” she emphasises.

Monday 31 January would have been Jarman’s 80th birthday, had he not suffered an untimely death from AIDS at the age of 52 in 1994, and MAG is currently hosting a retrospective of his work; “Protest!”.

Jarman was a painter, writer, set designer, gardener and filmmaker. But with such a wide range of genres and media, how can something be identified as Jarmanesque? And what, if anything, is his relevance and legacy today?

Jarman’s early paintings and films reflect the English countryside, and he spent the 1960s and 1970s using a super 8 camera to record his surroundings.

“He looked to England’s past; the green man, stone circles, all of that. All these things in the British psyche,” says Harriet Crisp, organiser at the Cube Cinema, Bristol, which has commissioned a selection of young filmmakers to create work inspired by Jarman.

“It’s that English aesthetic,” she adds.

References to the history of the nation abound in Jarman’s films and paintings with alchemist John Dee, Elizabethan Sonnets, and the romantic painters all looming large.

The thread of Englishness that runs through Jarman’s work reflects his status as a queer outsider from the upper-middle classes, as though he were looking for an alternate history that he could relate to.

“He’s very esoteric or mystic,” artist in residence at MAG Jez Dolan, who is working on a project inspired by “Protest!” says of Jarman’s style.

“Alchemy, He was an alchemist at heart.”

As he reached the 1980s Jarman became more of a mirror for contemporary society, railing in film and on canvas against the Conservative government and their morality and piety.

Often the past and present meet - as in the surreal dystopia of modern Britain explored by Queen Elizabeth the First in “Jubilee” - but his contemporary voice reflected an angst he experienced in the moment.

“That violence of the 80s, Thatcher and the breaking down of community; he seems to me to have really found his voice then,” says Corridan.

An authentic voice and authentic way of living, at a time when it wasn’t easy to do so, is a sentiment often expressed about Jarman’s work. His activism and openness about his HIV status being almost inseparable from the textured “GBH” and “Margaret Thatcher’s Dinner” around this time.

“I found myself loving and admiring this person, he made me feel like I wasn’t doing enough with my life,” says Mark Farrelly, whose one-man play “Jarman” is touring the UK this year.

“He said if you do make it into being alive you need to exploit it and celebrate it.”

DIY, diversity of practice and collaboration

Jarman began filmmaking whilst living in a derelict warehouse in Bankside, London and the collaborative beginnings he developed here carried on throughout his career.

“People are really inspired by him, not directly, but by his philosophy; DIY filmmaking, getting your friends together and making things,” says Crisp.

Jarman’s collaborations sparked the careers of many famous faces we see today with actors Tilda Swinton and Sean Bean both working with him in their early days.

Jarman's vision was also always minutely detailed. From dancers around a bed floating in the sea in “The Garden” to a street hustler dressing up as Bacchus in “Caravaggio” each scene is beautifully realised.

“Because he had a background of film and theatre design as well he could view an idea in a really interesting way," says Corridan.

“That kind of painterly or dramatic stage presence.”

Jarman’s work ranges from designing sets for “The Devils” to directing music videos for Pet Shop Boys, covering not just different media but also high and low forms of art.

“The diversity and breadth of his practice is something that’s still really really relevant,” says Dolan.

What is Jarman's relevance today?

The things which make Jarman unique are the same things that make his legacy so difficult to pin down. His diverse output, proliferation of references and collaborative process all make for a career that resists an eloquent summing up.

When trying to look for a visual vein from then to now, it's difficult to see a direct line, his legacy appears in more unexpected ways, as someone with fingerprints all over contemporary life.

There are the continued careers of his collaborators, and of course, the higher quality of life for those diagnosed with HIV, for whom he was an early voice.

There is also the creation of art inspired by him, the films at Cube, Dolan’s upcoming work and Farrelly’s one-man play inspired by his life.

Within these things, we can see a real-life continuation of Jarman as well as an artistic legacy. The collaborative spirit of Jarman’s work lives on as Crisp works with a musician on the Cube’s event and Dolan gets people involved in a Jarman-inspired performance piece.

The temptation, as with all cultural figures who die young, is to wonder what Jarman would be doing now. It is difficult not to consider the body of work his contemporary David Hockney has produced with digital media and think about what might have been.

The fact that Channel 4 (who showcased and funded much of Jarman’s work) is currently under consideration for a sell-off by the British government, is perhaps a sign that the political conditions he railed against are more present than ever. Many muse that above all Jarman would be out on the streets; Dolan believes he would be fighting for trans rights while Corridan says he would be marching against climate change. It isn't hard to imagine what he would have thought of refugee dinghies crossing the channel, many of which land near his home on the Kent coast.

When it comes to legacy, however, maybe Farrelly sums up best what Jarman himself would have thought.

“I don’t think he personally would be very interested in legacies because they can cast very long shadows," says the actor.

“He wanted people to do their own thing.”