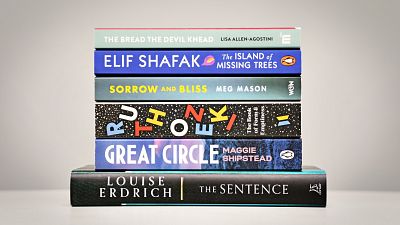 This year’s Women’s Prize for Fiction has an incredible shortlist that spans across the globe with authors from five different countries, and novels set across the world.

The annual prize is run by the Women’s Prize Trust with the goal of showcasing the best fiction writing of the past year by women, after too many years of women’s books going overlooked by other literary organisations.

Run since 1996, the prize has been won in the past by some of the biggest names in literature. Last year’s winner Susanna Clarke won for her fantasy novel “Piranesi”. Other winners include Maggie O’Farrell, Ali Smith, Eimear McBride, Chimamanda Ngozi Adichie and Zadie Smith.

“We were blessed with an extraordinarily high quality of submissions this year, which made whittling down the longlist from 16 to six particularly difficult,” Chair of judges and bestselling writer Mary Ann Sieghart said.

“Some are laugh-out-loud funny, others tearful, and sometimes the two are combined in the same book. We judges have loved reading them all and we commend them to you as the best fiction written by women and published in the past year. Our only problem now will be to identify the winner out of these six brilliant novels.”

Check out the six finalists here:

Hailing from California, Shipstead’s third novel follows the legend of globe-trotting adventurer Marian Graves. The fictional pilot goes from a childhood of prohibition America through the Blitz in London, and comes out circumnavigating the skies in the early years of aviation. Based loosely on Amelia Earhart, Marian Graves also disappears during a flight.

Much of the book also focused on film star Hadley Baxter as she wrangles with her complicated family history while trying to understand her new elusive role.

Sorrow and Bliss by Meg Mason

By New Zealand author Meg Mason, Sorry and Bliss follows Martha Friel as they deal with an unnamed mental illness. Mason’s novel is a confronting and tender examination of the ways mental health impacts a woman throughout a lifetime, even one that has been ostensibly successful as Friel’s.

I’ve *finally* read Sorrow and Bliss and everyone else is right: it is heartbreakingly wonderful. It moved me to laughter and tears, sometimes within the space of a single page. Very rarely have I felt so seen or understood by a novel. I love it so, so much (cc. @MrFeditor)

The Book of Form and Emptiness by Ruth Ozeki

Author and Zen Buddhist priest, American-Canadian Ruth Ozeki’s fifth novel finds the human in the inanimate. When Benny Oh’s father dies, the objects in his house gain sentience as they begin to speak to him.

With a hoarding mother providing increasingly more and more objects to talk to him, Benny’s life takes on a fantastical turn that includes him meeting a homeless philosopher and even his own Book, which narrates his life back to him.

The Bread the Devil Knead by Lisa Allen-Agostini

Written by Trinidadian journalist, Lisa Allen-Agostini, The Bread the Devil Knead is infused with Trinidad’s culture. Following Alethea Lopez, a nearly 40-year-old woman who public happy life and violent private life don’t match, a horrifying chance encounter changes the course of her life and gives her the courage to face long held demons.

The Island of Missing Trees by Elif Shafak

Their meetings are observed and narrated to us by the fig tree that stands tall over their secret rendez-vous. When, years later, their daughter seeks to find out more of her parents’ relationship, all she has as a connection is the fig tree growing in the back garden of their London home.

The Sentence by Louise Erdrich

Louise Erdrich is a Turtle Mountain Band of Chippewa Indians writer whose novels often feature themes of Native American life. Her last novel, “The Night Watchman” won the Pulitzer Prize for Fiction. Her latest follows a Native American woman sentenced to 60 years in prison. Finding solace in books, Tookie reads her way through her sentence.

After leaving prison, Tookie spends a year working in a book shop that is inexplicably haunted by the soul of the shop’s most annoying customer. A mystery, ghost story, and a rich examination of Native American identity in the US, Erdrich once again delivers.